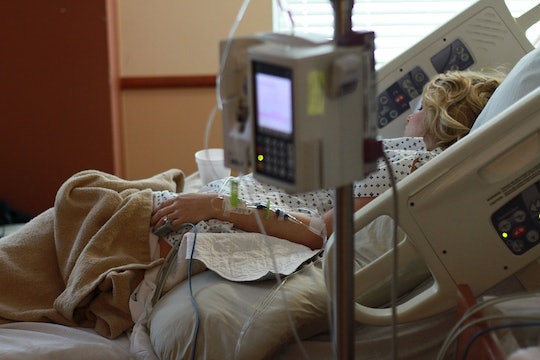 Is It Harder To Give Birth If You Have A Tilted Uterus?

More Like This
Your Guide To Swimming Postpartum
Lightning Crotch Can Actually Tell You These 7 Things About Your Pregnancy
Could Increased Anxiety Mean You'll Go Into Labor Soon? Experts Explain
Pool Cannonballs Are Pretty Much A No-Go During Pregnancy

According to What to Expect, having a tilted uterus means that your uterus has naturally grown backwards toward your spine instead of forwards toward your navel. This condition is extremely common and not even considered a medical problem. That being said, many women still wonder if their tilted uterus will affect birth or higher their risk of C-section. According to New Health Advisor, a tilted uterus has little to no effect on your delivery. The site also noted that by time second trimester hits, your uterus won't be tilted anymore, which takes away the worry of it contributing to a C-section.

There are still a couple symptoms that can occur affecting birth for a mom with a tilted uterus, according to the aforementioned New Health Advisor article, but they are very rare. These complications include an incarcerated labor, which is when your baby gets stuck in the pelvis instead of coming out into the abdomen or intense back labor. This means your labor may include lower back pain equivalent to a contraction. It's important to remember, however, that the chances of these complications in reference to a tilted uterus are extremely small.

The aforementioned What To Expect article also shared that after birth, with a tilted uterus, the position your uterus settles into is dependent on how much ligaments have stretched during pregnancy and weight gain that can potentially put added pressure on your uterus. So, there's hope that your uterus will not go back to it's "tilted" position, and even if it does, it still shouldn't have any impact on your health and future fertility or pregnancies.