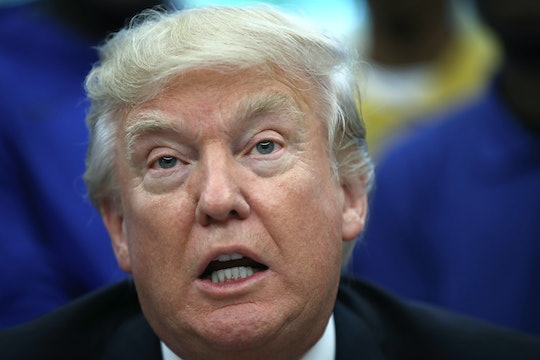 UPDATE: Romper's requests for comment from the NSA and the CIA were not immediately returned, though National Security Adviser H.R. McMaster said in a televised statement to the press on Monday,

EARLIER: According to powers granted in the Constitution, the president has the authority to declassify information. Normally, a president considering whether or not to reveal classified information to the public would consult with lawyers and agency heads about the pros and cons about such a reveal. The power to declassify comes from the assumption that a president would do so for a necessary purpose, something beyond wanting to boast about how much "great intel" he receives.

But according to the account in The Washington Post, Trump allegedly went "off-script" in the meeting with Russian Foreign Minister Sergei Lavrov and Ambassador Sergey Kislyak. After allegedly telling them and their aides, "I get great intel. I have people brief me on great intel every day," he allegedly began to discuss a terrorist threat from the Islamic State that was reportedly so sensitive, details about it have been tightly restricted within the U.S. government, and withheld from key allies.

So while the act may not technically have been illegal, it seems wildly reckless for a variety of reasons. First of all, it could jeopardize the country's relationship with the partner that provided the information to the government, since the partner had reportedly not given Trump permission to share the information with Russia. That partner might choose not to continue cooperating with the United States. And that could end up depriving the government of information necessary to help prevent a terror attack.

Trump also allegedly revealed the city where the intelligence was gathered, which could help Russia identify the intelligence source. There's no knowing what the Russians might do with this alleged information, or who they might share it with.

On top of all that, the fact that Trump allegedly revealed this information so casually to Lavrov and Kislyak, two men who have figured prominently in the controversy over Russian interference in the election, raises even more serious questions about the judgment of the man with the nuclear codes.

Two officials with knowledge of the Trump Russia meeting confirmed the Washington Post story to BuzzFeed News, with one saying, "It’s far worse than what has already been reported."

In a statement to the press on Monday, in an attempt to refute the Washington Post story, National Security Adviser H. R. McMaster said,

At no time were any intelligence sources or methods discussed and no military operations were disclosed that were not already known publicly.

The president only discussed the common threats that both countries faced.

So what Trump did was probably not illegal. But maybe it should be.