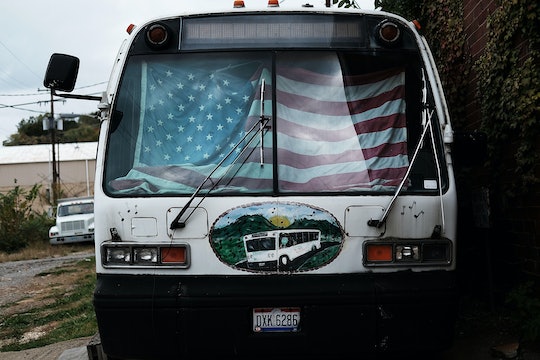 Is It Illegal To Bus People To Polling Locations? Project Veritas Seems To Think So

In what just might be the least damning sting video ever recorded, Project Veritas has released footage of what they claim is voters catching a ride in their pastor's van. In case you didn't know, it is not illegal to bus people to polling locations. In fact, most people would actually call that being a good citizen, but some Trump supporters disagree. Miami's Ruth Moreno has converted a decommissioned school bus into "The Love Bus," according to Think Progress, and has been traveling around South Florida educating Latino voters and giving them rides to the polls. But what some call public service, others call voter fraud (depending on who's on those buses).

Project Veritas was founded by conservative activist James O'Keefe, who's known for creating secretly recorded and deceptively edited videos to advance his agenda. He was even trying to entrap Planned Parenthood before it was cool. Now, after receiving $10,000 from the Trump Foundation, O'Keefe's Project Veritas has set its sights on trying to take down the Democratic National Committee, and promoting the myth of mass voter fraud on the part of Democrats, a claim that Donald Trump frequently makes, which has been roundly debunked. Dead people aren't voting, non-citizens aren't voting, and in fact, the only person who's been caught committing voter fraud was a Trump supporter. Whoops!

According to Vox, the Trump campaign filed a lawsuit against the Clark County, Nevada registrar after a polling place was kept open until 10 p.m. on Nov. 4 in order to allow everyone who was in line by the 8 p.m. closing time to vote, as required by law. Trump alleged during a rally in Reno the following day that the polls were illegally kept open in order to allow "a certain group" to vote. The polling place in question was a Mexican supermarket, and the voters were typical of the neighborhood's mostly-Latino makeup. Trump also claimed that Democrats had been bused in to vote against him, although no buses were present at the market.

Sometimes voters are brought to the polls by bus. But those voters are not secret Mexicans being brought across the border to rig the U.S. election, as some Trump supporters allege. They are Americans, legally registered to vote, who cannot otherwise afford transportation. It just so happens that black and Hispanic U.S. citizens are more likely to have low incomes, and also more likely to vote for Democrats. Surely, it would benefit Trump if only voters arriving by limousine were allowed to cast their ballots, but that's not how the democratic process works. Voters can take a free city bus, catch a ride with their church group, or show up on a horse if they so please. There is no transportation, race, or income requirement in order to vote.