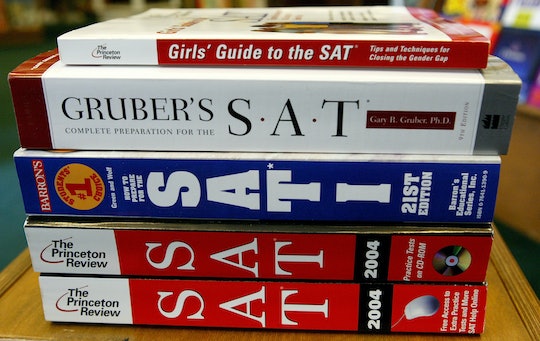 Is It Actually Illegal To Cheat On The SATs? A Legal Expert Weighs In

Dozens of wealthy and high profile parents were charged by federal prosecutors on Tuesday, alleging they paid millions to ensure their children would be accepted into elite universities across the country. Those charged allegedly used several different measures to make sure this would happen — including bribes and paying for answers for college entrance exams — but is it actually illegal to cheat on the SATs?

Actresses Felicity Huffman and Lori Loughlin were among the 50 people charged in the alleged scam, according to The New York Times. Romper's request for comment from Huffman's rep was not immediately returned and a rep for Loughlin told Romper, "I don’t have any information at this time."

Prosecutors allege those charged photoshopped photos of their kids playing sports, though they did not play them, and cheated on the SAT and ACT exams by doctoring their children's scores, according to CNBC. Some parents allegedly paid large sums of money to have exam administrators give students answers, correct them, or pose as their children to take the tests, as CNBC reported.

The SAT is the ultimate standardized entrance exam to get into college, according to USA Today — it tests a student's academic performance, allows colleges to understand a student's grade, and is part of the "whole package" that admissions officers look at when accepting students into their school. As so much weighs on this exam, SAT testing centers are taken very seriously; test materials are secured before, after, and during the test, and photo ID is required to be shown before taking it. But, there are some ways around this security.

"Cheating on the SAT is not, in and of itself, illegal because it does not violate any law," Lisa Karen Atkins, co-chair of Ogletree Deakins' Higher Education Practice Group explains to Romper.

While cheating on the SATs is rare, according to TIME, the methods in which people do cheat on the test can face legal action, as it may violate "applicable laws," like impersonation or fraud, according to the College Board. In order for cheating on the SATs to be illegal, the test taker must "violate state or federal law or other source of legal authority, such as an ordinance or international treaty," Atkins says.

And legal action isn't the first move in most cases if the Educational Testing Service, or ETS — the service that administers the SAT for the college board — suspects someone of cheating. Instead, the ETS will cancel the SAT scores before they are sent to schools. Over the 2 million SAT tests taken in a year, and about 4,000 of those scores will be cancelled due to suspected cheating, according to CNN.

Instead, the ETS often offers suspected cheaters three different options, according to CNN: "retake the test, cancel your score, or seek judicial review." And oftentimes, law enforcement is only contacted when these cheating scandals "involve large amounts of money," according to CNN.

As Atkins explains to Romper, "If the College Board concludes that an individual has deliberately gained or attempted to gain or share an unfair advantage on any College Board test, or otherwise threatened the integrity of the test, the College Board will prohibit the individual from taking the SAT, SAT subject tests, or AP exams."

She added, "Examples of this kind of cheating include capturing images with a cell phone on test day or being caught with a 'cheat sheet' containing test content, answer key, or other content providing an unfair advantage."

But there are cheating cases when law enforcement does get involved. Like in 2011, when 19-year-old college student, Sam Eshaghoff, was arrested for criminal impersonation and fraud after students in New York, paid Eshaghoff up to $2,500 to take the SAT for them using fake identification, according to CBS News.

Eshaghoff reached a plea deal for his actions, according to CBS News, and as the Miami Herald reported, the colleges those 16 students went to weren't notified of the students hiring him because "it is ETS policy to not tell schools about suspected or confirmed cheating."

Eshaghoff said during an appearance on 60 Minutes in 2012 that he was "saving lives." He said at the time, "I mean, a kid who has a horrible grade point average, no matter how much he studies, is gonna totally bomb this test. By giving him an amazing score, I totally give him like, a new lease on life. He's gonna go to a totally new college, he's gonna be bound for a totally new career, and have a totally new path in life."

In 2017, new security measures were made to stop cheating scandals like this from ever happening again in the United States and abroad, according to The Washington Post. The College Board called these measures "the most robust and direct actions taken by a college exam provider." With these actions in place, the College Board is:

These measures are trying to not only make it harder for students to cheat, but make it a fair playing field for everyone involved, according to ABC News.

Although cheating on the SAT largely results in test scores being thrown out, rather than students being arrested, cheating just isn't worth the risk.