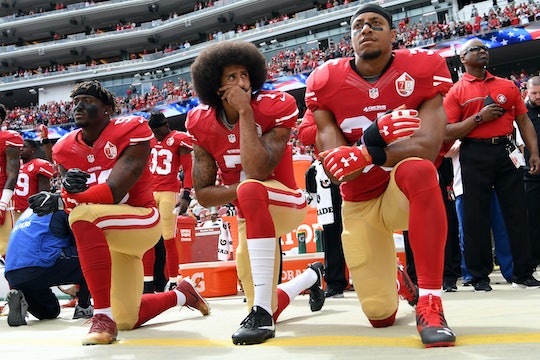 Is It Legal To Make Students Stand For The National Anthem?

If your Facebook timeline or Twitter feed has exploded recently with debates about whether it's respectful to kneel during the national anthem, you're not alone. Thanks to some recent comments by President Donald Trump, the debate is raging lately — even though former football player Colin Kaepernick started the protest back in 2016. Now, however, players from the NFL on down to high schoolers face difficult choices when it comes to joining the protest or not, with one school district even threatening that student athletes who refuse to stand during the national anthem will be banned from their teams. But is it legal to make students stand during the national anthem? Students have a right to peacefully protest, and now, the ACLU is getting in on the fight to protect that right.

On Sept. 22, Trump held a rally in Huntsville, Alabama, where, for some reason, he brought up the topic of football players choosing to protest racial injustice and police brutality by kneeling, locking their arms, or raising their fists during the national anthem. During that rally, Trump said, according to TIME:

Wouldn't you love to see one of these NFL owners, when somebody disrespects our flag, to say, 'Get that son of a b*tch off the field right now?'

Which obviously struck a cord for a lot of reasons, with responses ranging from how offensive the statement was to whether the protest Trump spoke of can be considered "disrespectful" to the flag since it's not actually about the flag.

Let's break this down: One of the people Trump was likely talking about was Kaepernick, who began sitting during the national anthem during preseason last year. He eventually switched to kneeling, but the reasoning behind the act was the same — to signal support for people of color being oppressed in the United States, and to take a stand against injustice and police brutality. Though he started the protest alone, he was soon joined by other athletes, across different types and levels of sports, according to SB Nation.

However, this season, the former San Francisco 49ers quarterback remains unsigned, according to Sports Illustrated. So he's not going out on the field with a team and protesting prior to playing the game. So either Trump was speaking about others who joined the protest out of solidarity and continue to engage in it, or he went after someone NFL owners no longer have any control over.

On Tuesday, Trump tweeted that "The only way out for them is to set a rule that you can't kneel during our National Anthem!," in regards to the NFL, according to USA Today. But whether or not that's something a private entity that employs and pays its players can do is one question, but is that the sort of rule that public schools can apply to students, who are not under an employee contract? The ACLU says no.

On Thursday, activist and writer Shaun King posted about a letter from Parkway High School in Louisiana addressed to student athletes and their parents. It read, according to the post on his Facebook page:

Parkway High School requires student-athletes to stand in a respectful manner throughout the National Anthem during any sporting event in which their team is participating. Failure to comply will result in loss of playing time and/ or participation as directed by the head coach and principal. Continued failure to reply will result in removal from the team.

The letter resulted in backlash, and made people question whether students have the right to participate in the protest by not standing during the anthem, despite what their school officials might say. The ACLU says that they do, and the ACLU of Louisiana warned that districts and schools like Bossier Parish School District and Parkway High School are "on notice" for trying to curb that right. A statement released by the organization read, in part:

Nearly 75 years ago, the Supreme Court rightly held that state schools have no business forcing students to stand for patriotic rituals...Indeed, schools should respect students who embrace their constitutional rights and stand up to injustice – not punish them. And it would be patently unconstitutional for the school to do so.

Choosing to stand, kneel, or sit during the national anthem is different than choosing to salute, of course. It might be that Parkway High School has a specific code of conduct that demands students stand for the anthem (though no such code of conduct has been cited by the district, and when Romper requested comment regarding such a code, the district did not point to one).

Public schools cannot discipline students for silent acts of political protest, as long as they don’t disrupt the operations of a school, according to Frank LoMonte, of the Student Press Law Center. Those acts include kneeling for the anthem or refusing to say the Pledge of Allegiance, according to LoMonte and PBS. In response to these criticisms, the Public Relations Liaison for Bossier Schools, Sonja Bailes, tells Romper in an email:

All Bossier Parish high school principals are sending out letters to student athletes and their families, making their expectations known as it pertains to proper decorum when the National Anthem is played at sporting events. Let me be clear, this is not a 'Parkway issue.'

So if administrators try to punish the students in the Bossier Parish School District if they choose to participate in #TakeAKnee, or if other schools do the same thing, it's not just the people of the internet who will object. They may have to face down the ACLU itself — and according to past court cases, it doesn't appear that the constitution is on their side.