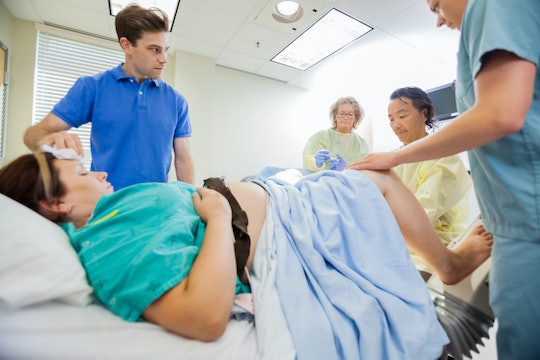 Is It More Painful To Give Birth With A Tilted Uterus?

There comes a time in every woman's life when she either learns or instinctively deduces that giving birth can be quite a painful experience. Although the details of pregnancy and birth can vary woman to woman, a condition or other feature that can influence conception, pregnancy, and birth may affect the birthing experieince. One such condition is a tilted uterus. And the specific question that may come about — is it more painful to give birth with a tilted uterus?

In women with a tilted uterus, the uterus is tipped backwards slightly, rather than sitting upright, according to the website for the American Pregnancy Association. This tilted position might cause back pain or pain during sex while pregnant, according to The Bump. Additionally, Women's Health noted that if you you might not even know you have a titled uterus, also known as a tipped or retroverted uterus, unless your gynecologist has told you otherwise. What's more, the condition is relatively common. In the aforementioned Women's Health article, OB-GYN Dr. Mary Jane Minkin said that about 30 percent of women have a tilted uterus.

All this said, the tilt isn't considered an abnormality or cause for concern. Physicians refer to it, as well as some other potential human traits, as a "normal anatomical variance," according to the What To Expect website.

So how does the position of your tipped uterus affect the birth? As it turns out, it's possible that over the course of your pregnancy, your uterus will actually move forward and un-tilt itself, according to the aforementioned article from The Bump. In that case, the trait has no real impact on the birth of the baby. Also, as noted in the previously-mentioned post on the What To Expect website, a tilted uterus does not raise the risk of complications during birth or the need for a C-section. Again, that's due to the straightening of your uterus over the course of your pregnancy.

If your uterus doesn't straighten itself out as your pregnancy progresses, however, it's possible that it could cause issues. According to the aforementioned post from the American Pregnancy Association, there's a risk of miscarriage if your uterus remains tipped backwards, though this is extremely rare. Additionally, it's possible that a tilted uterus could cause back labor, or an "incarcerated uterus," which is when your uterus gets trapped in your pelvis rather than moving into your abdomen during your pregnancy, or other complications during delivery, according to the previously-mentioned page on the What To Expect website. Again, it's very rare that these difficulties will arise, though the risk could be there. Women who don't have a tilted uterus may also experience back labor, however, so the position of your uterus alone won't dictate whether you'll deal with that during delivery or not.

If you're concerned that you may have a tilted uterus, talk to your doctor. He or she will be able to confirm if that's true and keep an eye on things so that your pregnancy and delivery go as smoothly as possible. After delivery, according to the What To Expect website, your uterus might again tip backward or it just may stay in the un-tilted position that pregnancy coaxed it into.