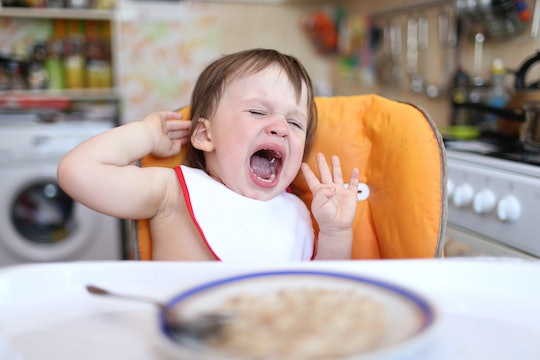 Here's The Reason Why Your Kid Hates Meat

One of my biggest challenges as a mom has been meal planning. Not only must I feed my kids three healthy and balanced meals per day, but I have to figure out how to get creative in the kitchen using the limited number of food items that they will actually eat. When they were little, I sat down with their pediatrician for advice on how to expand their palates, especially concerning the one food I couldn't even get my son to try: meat. I had to know, is it normal for my kid to hate meat?

As a child and teenager, I was a picky eater, so it shouldn't have come as a surprise that my kids would take awhile to come around to new foods. A lot of kids have this kind of reluctance. In fact, sociologist Dr. Dina Rose noted on her website that it is estimated that anywhere between five to 25 percent of kids are picky eaters. But meat seems to pose the biggest challenge. According to a Food & Nutrition article by registered dietitian, Sarah Pflugradt, MS, RDN, it's actually quite common for kids to go through a phase in which they won't eat meat.

Texture seems to be the main culprit. In her blog, Your Kid’s Table, Alisha Grogan, a pediatric occupational therapist wrote, "meat is often dry, on the blander side, and requires a lot of chewing. When you think about it, it really isn’t too surprising that kids often aren’t motivated to eat it."

Kids tend to gravitate either to crispy and crunchy textures like crackers and pretzels, or to soft and juicy textures like fruit, noted Grogan. If you're presenting your child with a barbecued sirloin or a baked chicken breast, they may be hesitant to take the smallest bite because the texture is unfamiliar. She recommended marinating and slow cooking meat in order to make it softer and easier to chew. Judy More, a dietitian for Baby Center, also suggested offering picky kids soft meats such as sausages, meatballs, minced or ground meat, and burgers that have a high lean meat content. Grogan noted that no matter what the fancy television chefs say, it is perfectly fine to provide dips such as ketchup, honey, barbecue sauce, or dressing with meats.

There may also be a biological reason your kid refuses to eat meat. According to Yummy Toddler Food, author and dietitian Maryann Jacobsen, MS, RD, explained that growth slows around age two, and this causes a decrease in appetite. Energy is then diverted to the child's developing brain, which requires two times the glucose of an adult brain. This is why most toddlers tend to favor starchy, carbohydrate heavy foods. But, this doesn't mean toddlers should only eat carbs during this growth period. Mixing protein with carbs (such as in sandwiches or adding ground meat to a sauce over pasta) can keep your little one on a balanced diet.

Finally, not everyone has to be a meat eater. If you or your child are morally opposed or religiously forbidden to eat meat, there are still plenty of ways to get protein. Pflugradt noted that protein requirements can be met through eggs, dairy, beans, nuts and nut butters, and soy products including tofu. You can get your iron through dark leafy greens, beans, and other fortified foods. Just make sure to take your child for regular check-ups and request blood work to confirm that they are receiving all of the nutrients their growing bodies need.