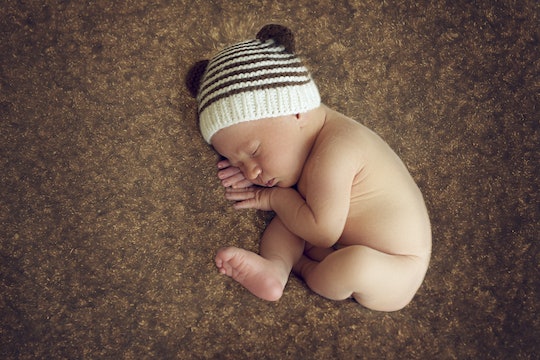 What To Know About Your Baby & The Fetal Position

Of all the things us parents worry about in the first few weeks and months of our newborn's life, our baby's sleep position is high on the list. I'd go so far as to say there are very few parents who don't know about Sudden Infant Death Syndrome (SIDS), which means most of us pay attention to expert recommendations when it comes to our baby. So, is it OK for your baby to sleep in the fetal position? Like most questions parents ask, the answer depends on a few key factors.

It's called the fetal position for a reason, right? It's the position your baby spends about 40 weeks (more or less) curled up into as a fetus in a pregnant woman's body, so you'd think it would be OK for your baby to sleep that way once they've entered the world. Unfortunately, that's not always the case. In fact, and according to the National Institute of Child Health and Human Development, SIDS risks can be raised in certain sleeping positions.

The American Association of Physicians, (AAP) in their most recent recommendations for sleeping positions for babies, outlined that in order to reduce the risk of SIDS, babies should be placed on their back on a firm surface. That means if your baby is a newborn who wants to sleep with their feet pulled up to their belly and arms tucked in, it's safe and within AAP guidelines as long as they're laying on their back or loosely swaddled.

Still, many parents report that no matter how many times they flip their baby back from their bellies with their feet tucked up under them, they'll find their babies back in that same position just a little while later. If your baby can move themselves back into the same position repeatedly, they will most likely be able to rouse themselves from sleep, which is one of the keys to preventing SIDS.

Putting your baby "back to sleep," as the National Institute for Health has recommended for decades (and thereby decreasing SIDS rates significantly in that time), is just one of the recommendations for safe sleep that you should employ when you have a baby at home. You'll also want to ensure your baby does not sleep with soft toys, pillows, or blankets until they turn 1 year old.

Just remember, back is best, and if your baby is flipping over consistently, they're probably old enough to rouse themselves from sleep if necessary.

More Like This
Should You Swaddle Your Baby In The Summer? Here’s How To Dress Them
New Infant Safe Sleep Guidelines From The AAP Discourage Bed-Sharing
The Best Toys For 3-Month-Olds
How To Breastfeed A Baby With A Cleft Lip Or Cleft Palate