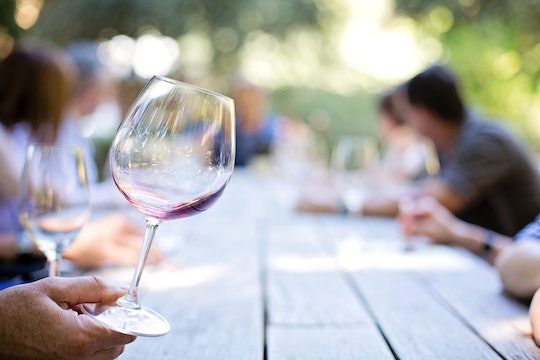 Is It OK To Drink Before Knowing You're Pregnant?

Even if you're planning to get pregnant, most women don't stop drinking until they get a positive pregnancy test. But what about those drinks you had before knowing you were pregnant? The thought of harming your baby before you even know about their existence is alarming at best. If you're wondering if is it OK if you drank alcohol before you knew you were pregnant, you're not alone. Luckily, since you're just discovering your pregnancy, you more than likely don't have anything to worry about.

Alcohol is well known for its damaging effects on developing babies. According to Fit Pregnancy, fetal alcohol syndrome (FAS) is the leading preventable cause of developmental problems, brain damage, social abnormalities, and preterm birth in babies. The Mayo Clinic reported that FAS affects about one in every 1,000 babies.

One study from Harvard University found that there is likely no connection with drinking a small amount of alcohol in early pregnancy and developmental problems after birth. In the first trimester at least, the risks seem to be smaller. However, don't use that information as license to drink during the first trimester (or any of the other trimesters, for that matter.) Parents noted that stopping all alcohol consumption once you learn you're pregnant is just about the only thing you can do to ensure your baby is completely safe from FAS. Like every aspect of pregnancy, starting with a healthy body is important, and eliminating alcohol is one of the easiest (and most important) places to start.

The article also stated that some women are more prone to pass on FAS to their babies than others. Some women who drink during pregnancy won't bear a child with FAS, and others will, so it's best to just avoid it altogether and thereby, avoid the risk of fetal alcohol syndrome.