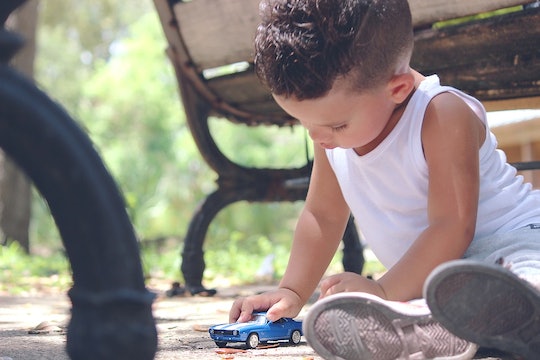 Is It OK If My Toddler Isn't Talking At 18 Months?

As your baby approaches toddlerhood, it can be overwhelming to keep up with their development, especially their speech and language. If your baby has missed a milestone, or seems to be a late bloomer in some regard, you might be confused on whether the delay is OK or not. There's always a relative with a child who didn't talk until they were 3, or a neighbor with a baby who didn't walk until they were 2, but, "what about my baby," you wonder. Is it OK if my baby is 18 months and not talking?

According to the Centers for Disease Control and Prevention (CDC), by 18 months, your baby should have several single spoken words, the ability to say or shake their head "no," and they should point to show things they want. These are considered to be the minimum milestones of speech and language development as determined by the government, and are sometimes used as the minimum developmental milestones of language by doctors.

However, many speech and language pathologists, pediatricians, and child development experts consider 18-month-old communication milestones to be a bit different than the standard government recommendations. According to Pathways, a non-profit supported by the American Academy of Pediatrics and comprised of leading doctors, therapists, and child development professionals, your 18-month-old should use at least five to 10 words, respond to questions, repeat words overheard in conversation, and understand at least 50 words and simple verbal directions.

Other healthcare systems, such as Kids Health, suggested that most 18-month-olds are saying 20 words, pointing to a number of pictures in books when asked, pointing to objects and people in their environment when asked, and pointing to several body parts. If, at 18 months, your child prefers gestures to vocalizations, has trouble imitating sounds, or difficulty understanding simple verbal requests, it might be time to talk to your pediatrician.

Of course, toddler development is on a spectrum, and there is a wide range of "typical." But, within the early childhood education field, it's recommended that you seek further evaluation sooner than later if you or your doctor notice any delays in your child's development. Frequently, the issue can be due to hearing issues, or excess fluid in the ears. As The New York Times mentioned, the assessment is crucial: the earlier it is made, the earlier the speech-delayed child can get some help, and the earlier the help, the better the prospects.

If there is a larger development issue, you'll be glad to begin doing what you can to support your child as early as possible. According to the American Speech-Language-Hearing Association (ASHA), more than one study has indicated that the older the child at time of diagnosis, the less positive the outcome.

While children do develop at their own pace to some extent, researchers now know that there are certain milestones which should be reached by a specific age. When they are not reached, this can be concerning — while some children do seem to catch up on their own, others do not. If you notice a delay in your child's speech and language development, or if you have any concerns or questions, it's always suggested that you speak to your pediatrician regarding the best next steps to support your child's healthy development.

If your child is developing typically in every other way, more than likely, they're just a late talker. But, it is better to ask and find out, rather than wait and see.

More Like This
10 Ways Breastfeeding Is Good For Moms, Too
20 Weird But Genius Health & Beauty Tools For Babies
12 Helpful Tips For Hiking With Kids
Gathre’s Winnie The Pooh Collection Is Finally Here