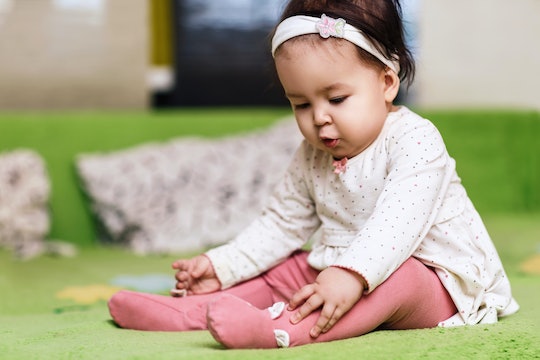 Here's The Deal With Crawling By 12 Months

As your infant gets older, there is so much to look forward to. She'll smile her first smile, start cooing and giggling, take her first bites of solids, get her first teeth, and start to stand, crawl, and walk. As a parent, you may know that babies all develop differently and in their own time. Still, it can be difficult to not compare your baby to other babies, or even against your own expectations. If your baby is getting older, and still not moving, you might be wondering, is it OK if my baby isn't crawling at 12 months?

According to Parents, the desire to move can be based largely on your baby's temperament. Some babies are determined to get around, even scooting along on their bottoms, while others are simply content with what is in their reach. Around 7 to 10 months, your baby may show signs that they are getting ready to move, such as getting up on their hands and knees and rocking back and forth.

The average age for babies to crawl is between 9 and 10 months, as noted in Parenting by Dr. William Sears, but the timing of all milestones is extremely variable. This can be dependent on baby's individual personality, and their size. "Mellow" babies might sit up, crawl, and walk later than "hyper" babies, Sears mentioned, and leaner babies might move earlier than bigger babies.

Sears also noted that, above timing, consider progression when analyzing your baby's milestones. Is she slowly progressing towards moving, by getting their weight off of the ground, rolling, sitting, and pulling to stand? Is your baby developing more motor skills this month in comparison to last month? If so, they are on their way.

According to Scientific American, babies in many cultures do not crawl at all. And studies published by Pediatrics suggested that many American babies are now not crawling at all, going straight from sitting to toddling. The New York Times noted that the reason for this completely benign new phenomenon seems to be the Back To Sleep campaign, which was started in 1994 to help prevent Sudden Infant Death Syndrome (SIDS). Since babies are spending more and more time on their backs, they don't develop the core muscles necessary for rolling and crawling as quickly as they otherwise might. But, as the Pediatrics studies emphasized, there is no proven medical consequence to not crawling; it is not a necessary precursor to walking, or other physical development.

In order to encourage your baby to move, be sure to provide ample amounts of tummy time, Kids Health noted. Tummy time will encourage movements, such as lifting their heads, rolling over, and holding their body weight on their hands, which build core muscle strength. Helping them get on their hands and knees, and enticing them with a favorite toy can also help to promote movement and motion, according to the American Academy of Pediatrics.

In general, if your baby is hitting other physical and gross motor milestones, there is no major concern if she is not crawling. It is always best to speak to your pediatrician about your baby's progress and gains, and let them know if you have any worries regarding your baby's development.