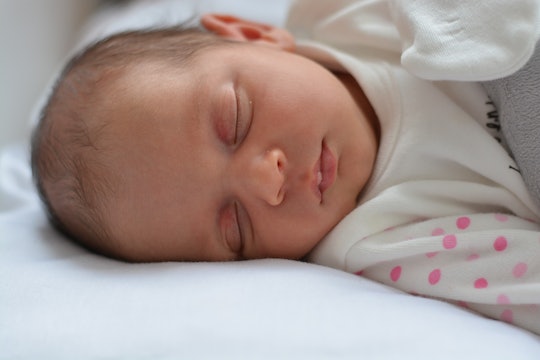 It Really Is OK If Your Baby Rolls In Their Sleep

When you're a brand-new parent, there's a lot to keep in mind. You're getting advice and instructions from a lot of different people. There's your doctor, the baby's doctor, your parents, your partner's parents, governmental agencies, books and websites, and all manner of well-meaning friends, family members, and total strangers. Still, you probably have a lot of questions, too. You know your little one isn't supposed to sleep on their stomach and try to always put them to sleep on their back. But, you may be asking, is it OK if my baby rolls in their sleep? How can you keep them from moving all over the course of the entire night, especially once they get a little bit older?

More Like This
The Best Dehumidifiers For Every Space In Your Home
How To Celebrate Pride As A Family
40 Instagram Captions For When Your Baby Meets Their Grandparents
Dreaming Of Fish? What They Mean If You’re Pregnant — Or Trying To Be

It's an understandable concern. You've read and been told countless times that letting a baby sleep on his or her belly could raise the risk of suffocation or death due to SIDS, but while you don't want your baby dozing off on their stomach, it's also not all that reasonable that you keep watch all night, flipping the baby back over onto their back whenever they roll. According to The Baby Sleep Site, the reason that your baby starts rolling over while sleeping all of a sudden is because, well, he now has the ability to do so. Babies learn to flip themselves over as early as 4 months old, though many are 5 or 6 months before they really get the hang of it, according to the Baby Center website. SIDS is still a risk, especially at 4 months old, so nighttime rolling is worrisome for some parents.

According to Fern Hauck, a SIDS expert who penned an article on the Baby Center website, however, if your baby has the strength to roll himself from his back to his tummy, you don't need to worry about him rolling over at night. No need to run in to flip him back over if you see he's rolled, especially if he's also mastered the reverse roll, from his stomach back onto his little back. Additionally, if you've followed other recommendations meant to prevent against SIDS, such as keeping pillows, blankets, and plush toys out of the crib, there's even less to worry about.

Beyond having developed the strength to actually roll themselves over, at this stage, your baby is also in the process of developing the ability to recognize trouble while sleeping (and roll himself back over if need be), according to the What To Expect website. This means that, just like you or I, if your little one is, for example, having difficulty breathing for whatever reason while sleeping on their stomach, they'll readjust to alleviate discomfort, take care of the problematic situation, and make sleeping easier. Rather than lying there helpless, needing you to come to their rescue, your baby is summoning the independence to problem solve, albeit fairly simplistically, on their own.

Basically, what it comes down to is this: if you put your little one to bed on their back and when you check on them, they're now on their stomach, there's no need to fear, though if you have any lingering concerns, have a chat with your healthcare provider. If they flipped themselves over once, pretty soon they'll start doing it again and again.