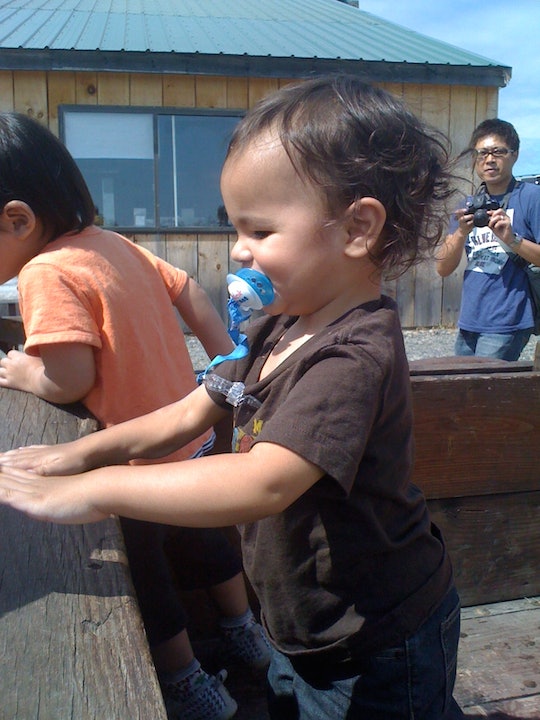 Is It OK That My 12-Month-Old Still Uses A Pacifier? An Expert Explains

My son was in love with his binky. So much that I even kept a jar of them in the car for emergencies. He had one in his mouth for longer than most baby books deem necessary, and I worried — should I have taken them away sooner? Is it OK that my 12-month-old still uses a pacifier? If you're wondering the same thing, you're not alone.

I was overjoyed that my son took a pacifier like a fish to water. He wasn't a loud baby, but he had a hard time calming down. Once he started taking that pacifier though, my life got infinitely easier. He was happier, he was calmer, and he was oodles and oodles quieter. The thing is, he didn't want to give it up. Like, at all. We had parties where we'd talk about how all his binkies were going to go to binky heaven, and he'd scream. We tried convincing him other kids needed the binkies, and he'd scream. We'd hide them, and he'd scream and find them.

The case for pacifiers is a strong one. The American Academy of Pediatrics found that children who use a pacifier are less likely to die from sudden infant death syndrome (SIDS), and also better sleepers overall. Giving him a pacifier felt like the best thing ever, but I had no idea the challenge that lay ahead.

I thought that pacifiers were one of those things like diapers or wine coolers — acceptable for only a very short period of one's life. For pacifiers, that meant that after my son was 1 year old, they had to go, right? Everybody knows that. Ask any mom group about a baby taking a pacifier after 12 months and half of them will probably say it's a huge no-no.

Apparently, however, everyone's worrying over nothing. According to the American Academy of Pediatric Dentistry (AAPD), pacifier use doesn't become important until the child is over 3 years old. But, is this the consensus amongst all pediatric dentists?

I spoke with Eric Felix, DMD, lead dentist with Children’s Dental Health Associates, P.C., a large network of 20 pediatric practices in the state of Pennsylvania, and he tells Romper, "Pacifiers can be a great tool to help sooth your young child. And at 12 months old, I would not necessarily be concerned of their use. The concern really begins as the child’s mouth further develops, and as they approach the AAPD’s recommended age of 3 to stop use. At that point, the pacifier can potentially create an open bite, which may result in speech problems down the road. There can be tongue thrust issues as well. Parents should do their best to adhere to the AAPD’s guidelines, but not stress too much at an early age. If your 12-month-old sleeps better at night with a pacifier, be happy that you have that to rely on and enjoy your well-earned rest.”

Had I known that I didn't have to worry so much, I could've saved myself so many calories in chocolate and wine and saved my son so much screaming. When it comes to pacifier use, you may have a while past age 1, but it can't go on forever. (That is way more reasonable than my former approach.) If you're concerned about your baby's pacifier use, talk to your pediatrician about ways to wean them from the binky. (Or let them have some fun for another two years.)