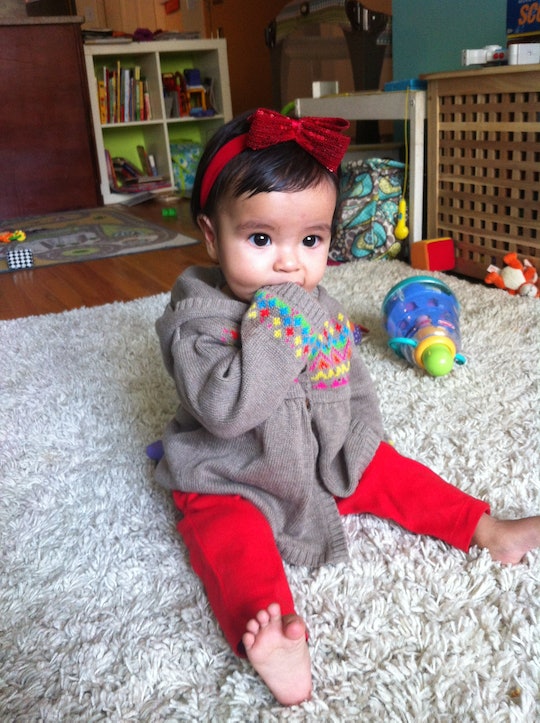 I love really love eating — to the point where my side hustle is as a food blogger. My daughter? Not so much. It took her a while to love solids. If you're experiencing this, too, you may be just as concerned as I was. I wondered, "Is it OK that my 6-month-old isn't eating solids?" That's supposedly the magic age for solids, but what if your baby just isn't that into them?

Lately, when to give solids to babies has been a hot button issue. Studies from the International Journal of Obesity found that delaying the introduction of solids until the baby is at least 6 months old has a positive impact on their future risk of obesity. The researchers found that babies who started at 4 months old were six times more likely to become obese by age 10 than those who waited.

On the flip side of the coin, a study completed by the American Academy of Pediatrics showed that delaying solids for too long increased the likelihood that babies would develop possibly life-threatening food allergies by the time they reached 5 years old.

Where's the sweet spot? At what point do I worry I'm introducing solids too late or not late enough? Is it OK that my 6-month-old isn't eating solids, or do I need to buckle down and just keep trying? If they don't want avocado by 6 months, should I be worried that they won't want to share guacamole with me when they're 6? (Or relieved? I don't share guac well.)

I talked to nutrition and feeding therapist Karly Hunter to determine what it means if your 6-month-old isn't yet eating solids. She tells Romper in an interview, "Not all babies are going to be ready for solids at 6 months. You have to pay attention to their cues. If they keep spitting it out, slow down, wait a week, and try again. Remember, babies are still getting what they need from formula or breast milk at this point, and it's not unheard of for babies to be uninterested in food until they're around 8 months old."

Hunter tells Romper that if they're still adamantly refusing to eat solids by 8 months, you should call your pediatrician — even though you've probably already talked to them about solids at your 6-month visit. "By 8 months, if they're still refusing to eat, it might be a motor skill or reflux issue. It's likely just stubbornness, but when you tell your pediatrician the specifics of how mealtimes happen, they can make a better judgment as an objective party."

In the end, it's all about your baby. If you're baby isn't ready to eat at 6 months, slow down but remain watchful and persistent, and keep an open dialogue with your baby's doctor.