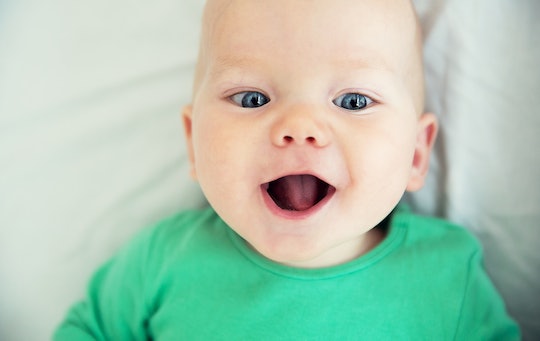 Waiting for your baby's teeth to arrive is an exciting time for any parent. Sometimes, though, those canines and incisors seem to take their sweet time. In this case, is it OK if your baby is 6 months old and not teething? That gummy smile is probably not a reason to panic.

For starters, you have to remember the average age at which babies teethe can vary. In general, babies begin teething around 6 to 12 months, according to the American Academy of Pediatrics. So if your kid isn't sprouting teeth around the 6 month mark, that's perfectly normal. You're still well within normal teething parameters. In fact, babies have been known to start teething as early as 4 months or as late as 17 months, according to Baby Center. Even late teething isn't a sign of developmental delays. Overall, the teething spectrum is pretty broad. Of course, if teething or anything else about your kid's health is causing concern, don't hesitate to reach out to your pediatrician for advice. There's no harm in a checkup.

Around the 6 month mark, though, it's wise to be on the lookout for signs of teething. For instance, your teething baby might start drooling excessively, refusing to eat, or chewing on anything and everything. This means the first tooth will probably appear soon.

Once your baby really starts teething, though, it's a whole new situation. Sure, some babies don't seem to mind the appearance of new teeth, but others are miserable at this phase. How can you help ease the pain? Gentle pressure and cold are often helpful. Most teething babies are soothed by gnawing on a chilled teething ring, or even having their gums rubbed with a clean finger, according to the Mayo Clinic. Super-cranky babies might respond well to some children's pain medication.

Whether your kid is still all gums or sporting some impressive chompers, the teething phase is one many parents anticipate arriving (and then departing). Thankfully, most kids have a full set of baby teeth by the age of 3, according to WebMD. Hang in there, parents, and keep plenty of drool cloths on hand in the meantime.