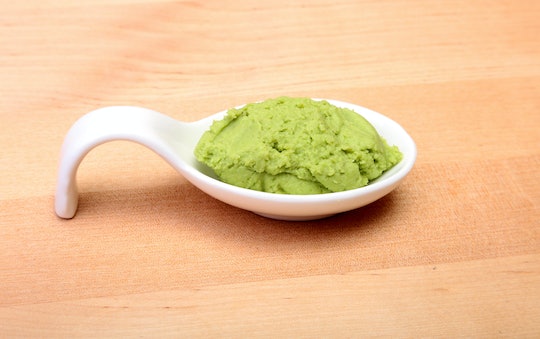 Is It OK To Eat Wasabi While Breastfeeding? Science Apparently Thinks So

When I was breastfeeding my daughters, I got all kinds of unwanted (and sometimes ridiculous) advice. I was criticized for eating really spicy foods, but coming from an Indian family, my palate was used to the spice. I continued to eat my spicy palak paneer, and my babies had no issues. But many people believe that eating strong foods like hot peppers or wasabi will negatively affect a breastfed baby. And while I’m living proof that eating hot peppers is fine, is it OK to eat wasabi while breastfeeding?

Many breastfeeding moms become conscious eaters, so it makes sense that eating strong flavors like wasabi would raise concerns. Wasabi is traditionally made from Japanese horseradish, and is usually served as a paste alongside sushi, or used to flavor dry peas. Its flavor is exhilarating, as it reenergizes your palate and feels like it’s going straight to your sinuses. But there is evidence that the flavors mothers eat when breastfeeding can pass into breast milk. According to an article by Dr. Perri Klass of The New York Times, when breastfeeding mothers eat, the nutrients and flavors of those foods cross through the mammary glands into the breast milk. She explained that by eating a variety of flavors, mothers are allowing their babies to develop a diverse palate, which can make it easier for them to enjoy those flavors as they get older and begin to eat solids.

There may be times when you may feel that your baby is fussy due to something you eat. According to Kelly Mom, however, there is no evidence that suggests that breast milk flavor contributes to fussiness or gassiness in a baby. The article noted that some studies show that babies actually breastfeed better when moms eat strong flavors like garlic.

But if your baby has a food allergy to things like wheat, corn, dairy, or citrus, explained Baby Center, you may find them to be fussy, congested, or they may develop a rash. But the article noted that food allergies are not in any way related to the flavors of the foods. So if you do find your baby is fussy after feedings, you may want to avoid the things you were eating for two to six hours before breastfeeding, because this is the time it takes for the flavors to pass into your milk.

For the most part, it’s best to continue eating what you like while you keep an eye on your baby’s reactions, because it’s not always easy to censor your palate. And hey, maybe they'll grow up to love wasabi, too.