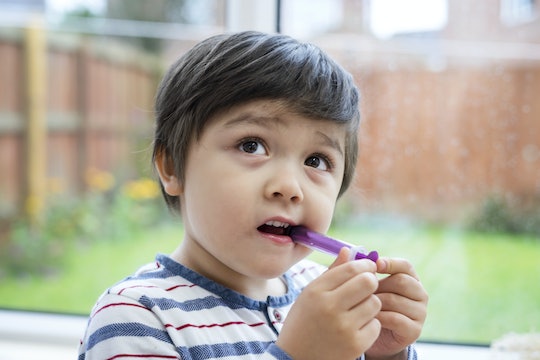 Does Your Child Have A Tylenol Habit? Put Down The Syringe

When Sarah Netter’s son tells her that something hurts and doesn’t relent after she’s tried redirecting his attention, she gives her child acetaminophen. “[I] would rather take him at his word that it hurts,” she says. This is a dilemma that many parents face: whether to give their children medicine, particularly when they aren’t sure if it’s needed. In some cases, it works as a placebo. Where the risks include liver damage, but the power of the “magical syringe” is undeniable, how should parents proceed, and what are the alternatives?

When Marissa Gillette’s son Milo was a toddler, he liked taking medicine from the syringe so much that he wanted to self-administer. His parents insisted on giving the “first” dose, then let him refill the syringe from a cup of water to take as much as he wanted.

“One time he was so sick, he stopped wanting to drink anything,” Gillette recalls. “But we were able to keep him hydrated with the syringe.” Their instinct speaks to what experts want you to know about pain relief.

Acetaminophen is a single active ingredient; it is ubiquitous as Infants' and Children's Tylenol, and typically used to reduce fever and relieve pain. In 2011, a Food and Drug Administration (FDA) advisory panel found that there was no reliable evidence that acetaminophen relieves pain better than placebo in children under 2. The panel voted unanimously that children’s oral single-ingredient acetaminophen products should carry instructions on how much to give babies between six months and 2 years. This was a result of acetaminophen overdoses in those younger than 2 increasing in the previous decade. The panel also agreed that liquid medicine for children should carry weight-based dosing charts, which are more accurate than dosing by age. Also more accurate: syringes versus a measuring cup.

In 2017, manufacturers and retailers of pediatric acetaminophen followed through on one of the panel’s recommendations: to have just one strength. Solid dose or chewables transitioned to a single strength of 160 milligrams. This way, medication errors are minimized.

The problem is that not much else has changed since the panel issued its recommendations. As pediatrician Dr. Alan Greene says on his website, DrGreene.com (called the pioneer physician website by the American Medical Association) it’s known that oral acetaminophen relieves pain in older children and adults, but studies on babies have been disappointing. Because infancy up to age 2 is a pivotal time of development, it’s wise to proceed with caution.

“Because acetaminophen is one of the most widely used medications at that age, because we know acetaminophen is a powerful drug, and because we know so little about the effects at that age (having not even shown pain relief), to me it seems an important area of research,” writes Dr. Greene. He goes on to ask if what’s working is the acetaminophen in Tylenol or another ingredient or a combination of ingredients that work, if it works. Various types of “sugar water” have been shown to significantly relieve pain in babies, he says, and large studies have shown that coal-based FD&C dyes (found in Tylenol) can affect behavior.

No medicine should be given/taken unless clearly needed. Period.

As of June 2018, the FDA committees agreed that acetaminophen is effective at reducing fever in kids under 2. Of course, on the flip side is that fevers often help kids to heal and are better left untreated — as long as the fever is below 104 degrees.

Too much acetaminophen is the single-biggest cause of acute liver failure in the U.S. It’s responsible for more overdoses and overdose deaths than any other drug.

“The main risk of giving acetaminophen (or any other medication) when kids don’t need it is the risk of overdose, which can hurt the liver in the case of acetaminophen, or other side effects such as an upset stomach,” says Dr. Andrew Bernstein, a spokesperson for the American Academy of Pediatrics (AAP) and a pediatrician with the NorthShore University System in Evanston, IL.

Kids are at risk for overdose any time they’re given more than the recommended dose or get more than four doses in 24 hours, Dr. Bernstein says. Some of the signs of overdose can include vomiting, abdominal pain, or lethargy. If there’s concern of an overdose, calling Poison Control is a good first step.

It can be difficult to know whether to dispense acetaminophen. “I recommend using acetaminophen for relieving discomfort (rather than ‘curing’ fever, which it doesn’t do),” says Dr. Charles Shubin, a pediatrician with Mercy Family Care Physicians in Baltimore, Maryland. In other words, if the child is in enough discomfort that their activities are significantly limited, that’s an indication that it might be useful.

He has a disclaimer, however: “No medicine should be given/taken unless clearly needed. Period.”

Emily Richman heeds this advice. With three girls so close in age, she finds that sometimes the girls who aren’t getting medicine want it because the other one is getting it. Her four-year-old asks for medicine all the time. “Obviously I don’t just give it to her because she asks, or any of the girls for that matter,” Richman says. All three kids will take what they’re given in the “magical syringe.”

If medicine is given when the need is unclear, there’s risk of overdose. This can easily occur when it’s used as a placebo because another caregiver might not know that it was given already if there wasn’t a clear need for it at first, says Dr. Bernstein. This can lead to multiple doses that are too close to each other.

Additionally, “if we get kids into the habit of always expecting a fix for a problem, we’re not helping them learn that sometimes what is needed for illness or discomfort is resting and taking time to get better,” says Dr. Bernstein.

Scientists have shown what many moms already know: that placebos can be effective. As Dr. Shubin says, “there’s always the possibility of placebo effect if we believe in what we’re doing having the effect we think it does.”

And this isn’t necessarily a bad thing, concurs Dr. Bernstein. Sometimes it helps when the child knows it’s a placebo, as with Gillette’s son.

When it comes to kids asking for medicine, parents often resort to such “tricks.” It’s better for them to just say no and explain why. Sure, there are actual placebos marketed as drug supplements, but why go this route? Dr. Bernstein isn’t a fan. “Not only does it lead to unnecessary medication use, but it also teaches children that things always need to be treated,” he says. “Sometimes it’s better to learn that things just need time.”

Whether or not the pain is real, it’s real to the child, as one mom pointed out in an online forum. So the “remedy” should be real too.

Here are some alternatives to consider, especially in situations when the need is murky:

If all else fails, one mom says she just has to bring up the N-A-P word, and her kids magically feel better.