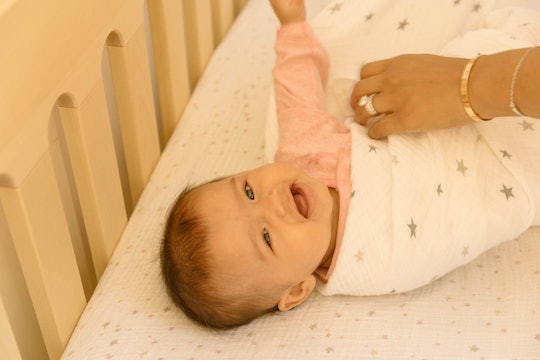 Here's What A Pediatrician Says About Letting Your Baby Cry

When my kids were babies, my family and friends would occasionally comment on how I was spoiling them. I would pick them immediately whenever they would cry, but was told constantly that I should let the tears flow once in a while. It felt unnatural to me, so I never let them cry, but many parents, including my own sister, swear by this method of self-soothing. It sounds kind of rough, but does make me wonder, is it OK to let a baby cry if nothing is wrong?

For some expert perspective, Romper reached out to Pennsylvania pediatrician and author of the upcoming book Whose Bad @$$ Kids Are Those?, Dr. Jarret Patton, who says this is an age-old question, and the answer really depends on a parent's choice and tolerance. “Personally, two of my children cried it out, and one didn’t,” notes Patton, “and it doesn’t seem to matter much from what I can tell.”

So why would a parent want to let their baby cry it out? Patton says that letting your baby “cry it out” after the first few months of age can actually have some benefits. He explains that after you have made sure that the basics are covered — making sure your baby is not hungry, not thirsty, not poopy, not in pain, and not sleepy — letting your child cry can help develop self-soothing skills and may even lead to less outbursts when they get older.

However, suggests Patton, the crying it out method should not be tried with babies before the age of 3 to 4 months. “In this early stage,” he explains, “your baby is still trying to get the reassurance he needs that his parents will take care of his basic needs.” For the first few months of their life, suggested the American Academy of Pediatrics (AAP), babies should be picked up and consoled in response to their crying. You can’t really spoil a newborn baby, the article explained, and if you respond to them when they need you, your baby will cry less overall.

When your baby is older, you may consider using the cry it out method to get them to fall asleep on their own. But you should know that there is no definitive answer from the medical community on whether or not it is advisable, because there have been conflicting studies done by researchers in recent years. A 2016 study published by the AAP suggested that in their study of 43 infants (ages 6 to 16 months), using the graduated extinction method (cry it out method) did not increase the stress levels of babies, which researchers measured through the babies’ cortisol levels.

There was an earlier study, however, published in 2012 by Early Human Development, that used a smaller control group of 25 babies (ages 4 to 10 months) and found an increase in babies’ stress and cortisol levels after they cried themselves to sleep. The fact that there are so many conflicting studies and reports on the effects of the cry it out method makes me question whether or not we should paint all babies’ behavioral patterns with one brush. Every baby is different and they vary in temperament, as do their parents. This is why it’s important to make decisions like these based on what is best for you and your family.

Dr. Patton notes that even as a doctor, he thinks the decision to let your baby cry it out is wholly up to you. “At the end of the day, this is a parental decision as there is no real right or wrong way to handle this." I never let my kids cry for long, and they aren’t spoiled brats. They sleep in their own rooms, and I’ve never had any problems. That being said, my own sister sleep-trained her twins with the cry it out method, and they are also happy, well-rested, well-rounded kids. It just goes to show that you really need to do what you think is right for your family, because no one knows what’s better for your kids than you.