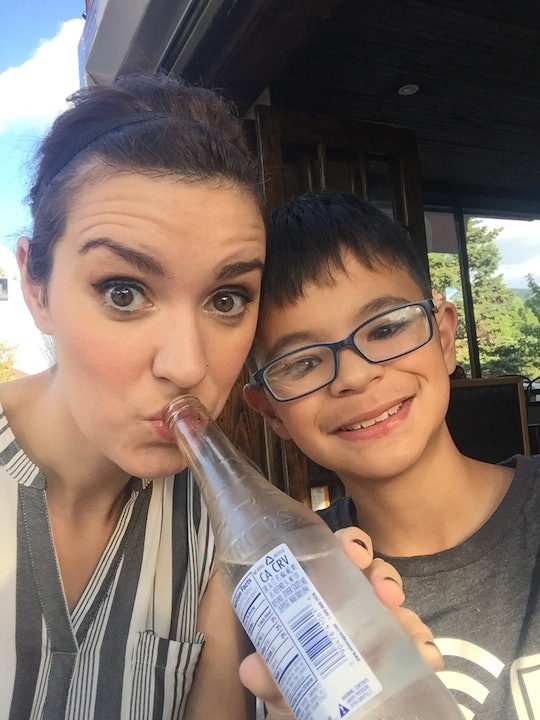 My mother loves to tell the story about how I began swearing. I was really young, and something must've utterly frustrated me. Apparently, it was bad enough that I told my (probably very unsurprised) mother that it was "a b*tch." I haven't stopped swearing ever since. I come from a family where my father swore so much at the computer printer that it was almost poetic. I don't think it damaged me at all, but I worry for my kids, sometimes. Is it OK to swear in front of your kids, or is it asking for trouble? Should I add more money to the "reasons my kids need therapy as adults" account?

According to a recent article published by professor of cognitive science at UC San Diego, author of What the F: What Swearing Reveals About Our Language, Our Brains, and Ourselves, Benjamin Bergen, it's completely OK to swear in front of your children, provided you're not using it as a means of abuse by negatively swearing at your children. There's a big difference between shouting an epithet after stubbing your toe as opposed to screaming "What the f*ck is wrong with you?" when your child makes a mistake. Words have power, and a lot of the power they own is due to the means in which they are used.

Truly, there have been very few in-depth studies surrounding the act of swearing in front of your children. However, Bergen noted that swearing is really innocuous. It's not something that has a deleterious effect on your child. He wrote that the studies which have been completed show this. In fact, the only language (word choice specific) that has been shown to have a negative impact on the development of a person is that of the use of slurs. According to The Los Angeles Times, "A 2014 study exposed 52 university students (average age: 21 years) to either a slur for homosexuals or a neutral term. Those who saw the slur subsequently thought that less money should go towards AIDS-HIV prevention efforts for 'high risk groups.' In another, 61 participants (average age: 23) saw either a homosexual slur or a neutral label. The ones who saw the slur positioned their chairs physically farther away from a person they believed to be homosexual by an average of more than 10 centimeters."

That's pretty definitive. It changes not only the future language of a person, but their belief structure as a whole. Words have power, and in this case, they have the ability to shape the thought processes of young adults and how they interact with others.

Another idea not frequently acknowledged is the notion that language is gendered. It's OK to swear in the locker room, or for a baseball coach to swear like there's no tomorrow, but the minute a woman utters even the lightest of profanity, they're considered "nasty." It's a disgusting double standard that holds women back, especially in the workforce, according to Social Games and Identity in the Higher Education Workplace. Swearing has become a feminist act.

Just the other night, I was driving and my husband and I stopped (the road was blocked) and got out. It turns out, there was a car needing a push. He went up and helped while I told the other drivers about the situation. The dude behind us kept laying on his horn. I was standing right in front of him and told him what was up. I said "Lay off the d*mn horn — they need to move the car." He shouted out his window, "Why do you have to use such nasty f*cking language?" I replied, "Because I f*cking can." The way he leered at me, the way he said it, I knew he thought that women who swear were somehow lower. By diminishing that idea by swearing at home, we are taking away one of the tools of the patriarchy.

For me, swearing is like air. Whether or not that makes me more intelligent, as research suggests, is up for debate. Swearing is a choice, and I've made mine. I am very careful with my language when it comes to words like "stupid," or "fat," or "lazy," or "bad," but the F-word? I don't see the f'ing problem with it. It feels right to use when I can't find the f'ing receipt I know I put in my purse. I don't use it to demean — I use it to describe or erupt.

No one is forcing you to swear in front of your kids, and it's a teachable moment to model when it is and isn't appropriate. People leave a theatre during curtain call? Absolutely OK to ask, "Where in the hell are they going? That's f*cking rude." Aunt Ginny's funeral? Not so much. OK, if it was my aunt, it would be OK (we all swear), but someone else's aunt? Not so much. Other than that though, do you really give a d*mn what some jerk thinks about your parenting if there's not a shred of evidence that it has a negative impact on your child? Of course you don't.