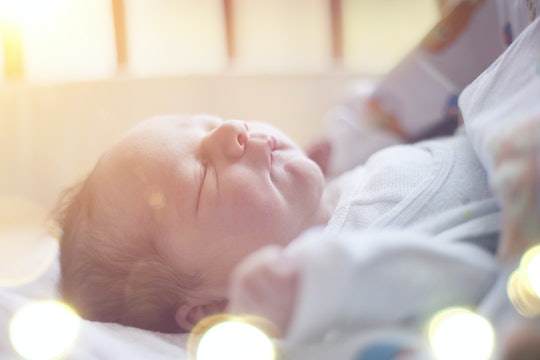 Is It OK To Use Teething Gel To Put My Baby To Sleep? Experts Have A Warning You Need To Read

Hearing your baby suffer from the pain of teething is heart wrenching. Those from the "older generation" (I'm looking at you, mom) might suggest DIY remedies that involve rubbing whiskey or rum on your baby's gums to numb the pain (yeah, no thanks). Other parents rave about using teething gel to help their babies sleep better. It's tempting, to be sure, but I'll save you from having to type, "Is it OK to use teething gel to put my baby to sleep" into your search engine. Instead, I'll put the topic to rest right here and now. Simply put, don't do it.

One of the most popular types of teething gels parents and caregivers tend to reach for to soothe sore gums are those containing benzocaine. Benzocaine, as explained by The Food and Drug Administration (FDA), is a local anesthetic that can be found in many over-the-counter products such as Anbesol, Orajel, or Baby Orajel.

The use of benzocaine gels and liquids, the FDA reports, can lead to a rare, but serious (and sometimes fatal) condition called methemoglobinemia. So this is when things get a little scary, parents. The New York Times defines methemoglobinemia as, "a blood disorder in which an abnormal amount of methemoglobin — a form of hemoglobin — is produced." In layman's terms, this condition greatly reduces the amount of oxygen being carried through the bloodstream.

The FDA earnestly warns parents to not use any products containing benzocaine on their children —especially those under 2— unless advised by a health care professional. The FDA issued two public health advisories as well, one in 2006 and another in 2011, due to the high number of reported methemoglobinemia cases.

Scarier still, just one dose could be enough to cause methemoglobinemia. As the American Academy of Pediatrics (AAP) states:

"The development of methemoglobinemia is not always related to the quantity of benzocaine applied. Even one spray has been associated with the condition."

So what's a parent to do to help ease the pain of teething, especially if teething gels with numbing agents are not an option? Well, the solutions are things that are already (most likely) at your fingertips. The website Healthy Children recommends things like gently massaging or rubbing your baby's gums with one of your fingers, or trying a firm, rubber teething ring (and to avoid freezing them). Or, as the site What To Expect suggests, try giving your baby a cold washcloth to chew on. They also recommend consulting your pediatrician to see if an infant pain reliever might be the way to go (never a bad idea to ask someone on your team).

You might also be raising your hand to ask, "But what about homeopathic teething gels?" The FDA has bad news for you on that one, too, unfortunately. As recently as last year (2016), the FDA issued a health advisory warning consumers that homeopathic tablets and gels also may pose a risk to infants and children. Some of the symptoms the FDA listed for consumers to look for after having administered the product included seizures, muscle weakness, and difficulty urinating. Again, no thanks.

In the FDA's advisory against homeopathic teething products, Dr. Janet Woodcock, the director of the FDA's Center for Drug Evaluation and Research, disappoints parents everywhere when she states that "teething can be managed without prescription or over-the-counter remedies."

So, if someone advises you to reach for the whiskey, rum, or any other numbing agent for your teething baby, politely remind them that the only person who should be partaking is, well, you (and only if you're not breastfeeding, of course).

More Like This
Cry-It-Out: The Popular Sleep Training Method, Explained
What Exactly Is The Ferber Method? The Sleep Training Approach, Explained
Baby Growth Spurts: When They Happen & What To Expect
Is It Good For Babies To Be Exposed To Germs? It’s Complicated