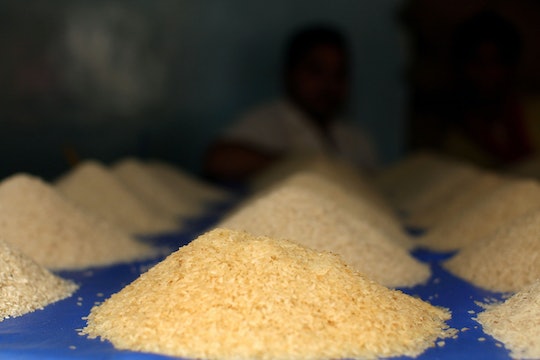 Is It Safe For Infants To Eat Rice Foods? It Might Affect Their Arsenic Levels

Earlier this week, the Journal of the American Medical Association Pediatrics released the results of its latest study on the effects of rice and rice-based products on infant children. And, the findings are alarming. According to the report, the more rice/rice-based products infants consumed, the higher their arsenic levels. However, what does that mean, and is it safe for infants to eat rice cereal and rice foods?

First, the study followed 759 infants, whose parents were interviewed multiple times during their first year of life. During these interviews — at four, eight, and 12 months — information about the infants’ rice intake was collected and urine samples were obtained, according to JAMA. (80 percent of those studied were introduced to rice cereal during their first year of life.) Researchers than compared the arsenic levels between infants exposed to rice and those not exposed to rice to determine if there were any differences, and what they found was that infants who ate rice cereal had more than three times the amount of arsenic in their systems then non-rice eaters. (Yikes!)

But what is arsenic, and why is it so dangerous?

Arsenic is a naturally occurring element and, according to Live Science, low levels of arsenic are found in soil, water, and air — and also in our food. The good news is arsenic does not remain in the human body; it usually leaves one's system in 24 or 48 hours. However, since long-term exposure to high levels of arsenic has been associated with many types of cancer and heart disease, this news is disconcerting. And it's troubling because of what it means for the environment: rice — unlike other grains — readily takes up arsenic from the environment, according to the Food and Drug Administration (FDA).

As to whether or not rice cereal, and other rice-based products, are safe for infants and young children, Dr. Lolita McDavid, a pediatrician and the medical director for Child Advocacy and Protection at UH Rainbow Babies and Children’s Hospital in Cleveland, told ABC parents can probably continue to feed their babies rice cereal: "Until the FDA tells us what is an unhealthy level of arsenic, I think people will probably continue to have parents use rice cereal."