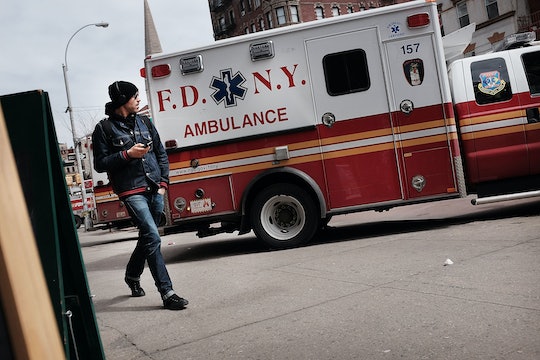 Is It Safe For Kids To Be Around Radiators? A Tragic Incident Has Parents Concerned

On Wednesday, a tragic radiator accident left two young children dead in New York. The incident took place at the family's Bronx apartment after a radiator valve cap blew off (possibly due to steam pressure), allowing the hot steam to escape and burn the two children living in the home, according to ABC News. It's the kind of heartbreaking incident that's clearly any parent's nightmare, and it's led several to wonder: Is it safe for kids to be around radiators?

Radiators are a common feature in colder states, and parents should definitely childproof their radiators in order to keep curious and clumsy kids from accidental burns. Accidents arising from kids touching or falling against radiators are actually fairly common: In 1993 (the last year for which the Centers for Disease Control and Prevention appears to have radiator accident data), an estimated 1,881 children were treated for radiator burns across the United States. Close to 80 percent of the burns, however, were caused by radiators that didn't have radiator covers or insulation surrounding their pipes.

According to CBS, the radiator accident that resulted in the death of the two girls, 2-year-old Ibanez Ambrose and 1-year-old Scylee Vayoh Ambrose, was due to a malfunction. The Ambrose family was living in an apartment that houses the homeless, and other families in the building are now being moved to another shelter as authorities investigate the incident.

"We are devastated by this tragedy," Commissioner Steven Banks, from the Human Resources Administration, told CBS. "We are investigating and taking steps to immediately transfer the four other families being sheltered at this location to another shelter. ... We will ask questions and work to get answers about what happened here — transparency is key."

In other words, what happened in the Bronx on Wednesday is definitely not the norm, and was likely due to a malfunctioning radiator. However, there are ways for parents to help ensure radiator safety at home. Radiators — especially older radiators — can trap air, which should be bled from the system before winter begins. It's also extremely important to ensure a boiler's safety relief valve is functioning properly: Dave Slife, owner of Slife Heating and Cooling, told Cleveland.com that, without a functioning safety valve, "Your boiler’s a bomb sitting in your basement."

Check your radiator's safety manual to learn how to bleed your radiator or double-check its safety valve, both of which are meant to be easy enough. If you don't feel safe checking the radiator or don't know how to do it, call in an expert and have them check for you. Parents should also make sure to child-proof their radiators and make sure furniture is moved far enough away to avoid any accidental touches. Insulating radiator pipes or installing radiator covers doesn't interfere with heat emission, but can protect sensitive little hands.

The public won't know for sure what caused the radiator mishap in the Bronx on Wednesday until investigations finish, but it's likely that it was a malfunction and definitely outside of the norm.