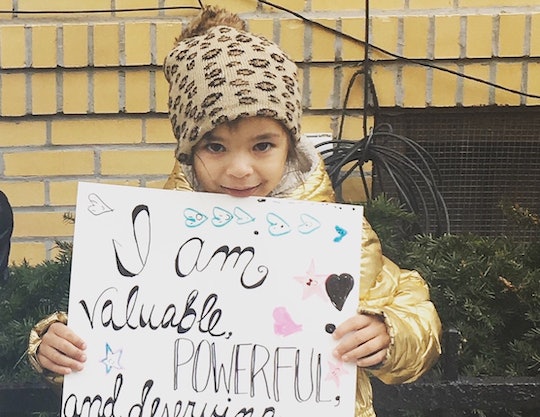 Before Taking Your Kids To The Women's March, Here's What You Need To Know

Like many people, I was horrified by the turn of events of the November 2016 election. I felt betrayed, sad, angry, and I wasn't sure what to do with all of that emotion. When I heard that there was going to be a massive protest in the wake of Trump's inauguration, I was ready to roll up my sleeves, paint some boards, and hit the pavement. What I was less sure of was whether or not I should bring my then-5-year-old daughter. I didn't know if the Women's March was safe for kids immersed in the energy of the moment, or if it was better for them to stay home.

Ultimately, I did bring my daughter, and while it ended up being extremely safe for her — the only risk being the noise of the crowd and absolute lack of bathrooms — I can understand parents' hesitancies. But according to all reports, both Women's Marches that have happened so far have been extremely safe for attendees and have resulted in very few arrests. These marches have been historically well-attended with very few, if any counter protests, and have happened across the country for two years in a row. That's a big momentum to maintain, and it makes the relative safety of the ordeal quite remarkable.

It's understandable that parents would be concerned for their children's safety, especially given the tragic death of Heather Heyer at the Charlottesville protest in August 2017. The world is a scary place, and navigating the terrain seems as if it might be impossible at any given moment.

That being said, therapist Paula White of Psychology Today wrote, "When children become activists, they begin to connect the dots between the problems they see and the solutions they envision." I was not raised believing that I had a voice, or that my opinion mattered. I was not cradled in the arms of people willing to give up some of their own comfort for the betterment of others. That simply wasn't done, and that type of example is not what I want for my children. I want them to understand that their voices matter, that they should exercise their right and exploit the privilege of their birth to advocate for those who are not able to wield that privilege, and even for those who choose not to. I want them to understand the value of raising their voices and their fists in synchronistic harmony with the aching cry of their ancestors and know that it is being heard.

The Women's March in Washington, D.C. is both a march and a rally, and is a non-violent protest. According to The Hill, it has been fairly uneventful and very safe. That's not to say you shouldn't take proper precautions, as Romper's Steph Montgomery reported last year. Make sure that your children are prepared for what to do if you're separated, have identification on their person, on their bodies, and explain to them what to do if things go sideways.

Also, if you find yourself in an area near where people are engaging in acts of civil disobedience, have an escape plan to remove yourself and your children from the vicinity as quickly as possible.

Overall, the Women's March has been a safe, valuable learning experience and method of raising awareness for almost three years, and it will no doubt continue for many more. For my family, it has been a means of letting my children experience the increased awareness that protest brings, as well as giving them an outlet for their confusion and anger over the current administration. And we've done so without much worry over our safety.