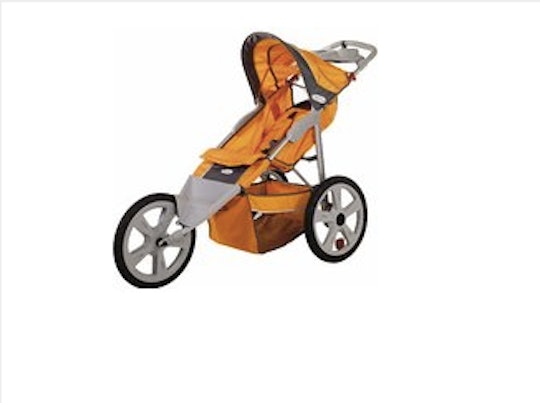 Is It Safe To Buy Pacific Cycle Strollers? Parents Looking For A Replacement, Rest Easy

Strollers are meant to be safe ways for you to get your kids around, which is why it's always scary when a company or brand announces that something you count on to keep your little ones secure falls a little short of that goal. On Monday, Pacific Cycle recalled some jogging strollers, but don't worry too much just yet — it's still safe to buy Pacific Cycle strollers in general. The company recalled just two types of strollers with a quick release mechanism for a crash and fall hazard.

Update: In an email statement, Pacific Cycle spokeswoman Sofia Whitcombe noted, "Pacific Cycle has received reports that some consumers have experienced issues with the front wheel coming loose on certain models of swivel wheel jogging strollers that have a quick release mechanism for rapidly removing and re-installing the front wheel. We are working with the CPSC to provide a repair kit. ... Consumers should stop using the recalled jogging strollers and contact Pacific Cycle customer service at 877-564-2261, from 8 a.m. to 5 p.m. CST Monday through Friday to obtain a repair kit."

According to a recent press statement, there were 132 reports of a wheel in each of the affected models coming loose, which resulted in 215 injuries. The affected models are: Instep Safari, Instep Grand Safari, Instep Flight, Schwinn Turismo, and Schwinn Discover Single and Double Occupant Swivel jogging strollers, so you should check the model numbers to see if your specific model was among those affected.

Customers with the recalled models are asked to contact Pacific Cycle for a repair kit, so no chance at getting a refund just yet. None of the injuries reported have been fatal or very severe, but bruises and scrapes because of a faulty wheel on a stroller is nothing to mess with. The repair kit includes a structure that uses a screw-on-and-off method instead of the quick release the product had before, along with a new warning label.

The strollers were sold between 2010 and 2016 at Walmart, Amazon, Target, and Toys R Us, along with other small retailers, according to Pacific Cycle's website. According to some consumers as far back as late 2015, the strollers' faulty wheels can do some considerable damage. No one likes a bruised up toddler, and according to some who claim their children and spouses were hurt, it's far too much drama and pain for one measly wheel. (Pacific Cycle did not immediately return a request for comment on those claims.)

Currently there are two recalls at Pacific Cycle. There's also a recall on the "Magnetic No-Pinch Buckle Infant Helmet," sold exclusively at Target for faulty chin straps. But it's not just Pacific Cycle — there are other companies that also have recalls out on their strollers, which is pretty heartbreaking. Uppababy, Grico, and Britax all have open recalls on certain strollers and products in recent days.

Luckily no one was severely injured using any of the strollers counted in the open recalls, but it's better to be safe than sorry. Instead of getting angry, maybe it's worth double checking the brakes and steering system the next time you're looking to take the kids out on a walk. Because no one wants little babies flying around because of a faulty front repair. Better safe than sorry.