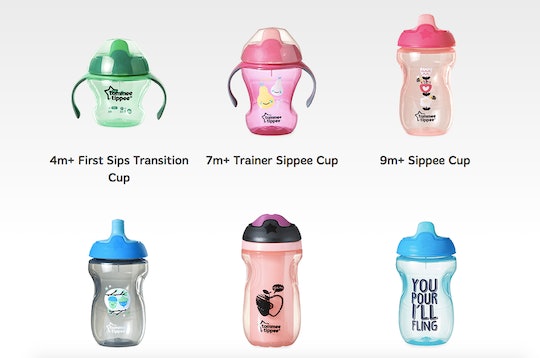 Is It Safe To Buy Tommee Tippee Sippy Cups Now? Proper Care Can Put Your Mind At Ease

Roughly 3.1 million Tommee Tippee sippy cups were recently recalled after several concerned parents discovered the valves underneath the lids were covered in mold. Health and safety officials acted quickly with the company last month to get the hazardous products off shelves as there had been more than 3,000 reports of finding mold in the lid’s valve piece and more than 60 children became ill with diarrhea and vomiting after using the spill-proof cup. In addition to the recall, the company also addressed its consumers’ concerns on social media, promising to replace affected products as necessary. It was quite alarming when parents first discovered mold in their toddler’s favorite sipping device, but is it safe to buy Tommee Tippee sippy cups now? The company says sippy cups that don’t have the hazardous part — a white one-piece removable valve inside the lid — are totally safe to use with proper care.

If you received a replacement sippy cup from the company or would like to just buy one on you’re shopping next, the company says following the cleaning guidelines is very important. Just make sure it’s not one with a white one-piece removable valve. The recall included five types of sippy cups with the white valve, but all of the company’s other sippy cups were unaffected.

"Mold can develop on the removable, one-piece, white valve inside the spill-proof Tommee Tippee Sippee cups when it remains wet or moist and is infrequently cleaned," the Consumer Product Safety Commission stated in its recall announcement on May 27. "Mold ingestion poses a risk of gastrointestinal symptoms and infections in consumers with compromised immune systems."

Filling any other Tommee Tippee sippy cup with milk, water, or juices is safe as long as the cups are cleaned properly afterwards. It’s very important to remove the valve from the cup to make sure it gets a thorough clean. According to the company’s cleaning guidelines, all parts should be washed immediately after use in a warm soapy water and then rinsed. Valves should only be hand-washed, while all other parts of the cup can be put in the dishwasher. Also, the company advises against using its sippy cups with carbonated beverages, formula, or hot liquid.

The cleaning process may seem a bit time consuming, but unfortunately a dishwasher won’t be able to properly and thoroughly clean the small nooks and crannies of a sippy cup. If you find that you’re having trouble cleaning the tiny spaces, try a nipple brush to get into the spout or valve. Some moms recommended even using a water pic to get a deep and powerful clean. Get creative and find the best method for your household for getting any gunk out of tiny spaces that make those sippy cups so useful for both moms and tots.