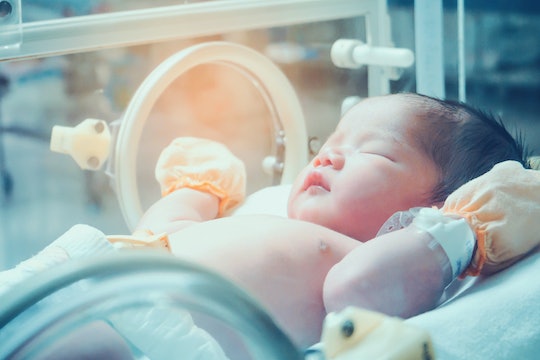 What To Know If You're Considering Co-Sleeping With Your Preemie

For many sleepless parents of newborns, the lure of co-sleeping and its potential benefits is nothing short of magical. The simple proximity of mother to baby alone can help decrease the frequency of middle-of-the-night wake ups and make breastfeeding significantly easier. The decision to co-sleep, however, is a much weightier one when it comes to considering the unique needs of a preemie baby. It is extremely important parents ask themselves, "Is it safe to co-sleep with a preemie baby?" and understand all the risks associated with co-sleeping, before taking the plunge.

According to Kellymom, the definition of "co-sleeping" is the practice of sleeping in close proximity to your child, whether it is in the same bed or just in the same room. The term "bed-sharing" is used more specifically to describe when, as you might have guessed, a baby is in the same bed and/or sleeping surface as you.

The number one, bold font, neon-highlighted, please-pay-attention guideline recommended by The American Academy of Pediatrics (AAP) to all parents is that all healthy infants be placed on their backs to sleep. Babies who are placed on their stomachs to sleep are at higher risk for Sudden Infant Death Syndrome (SIDS), which, according to the National Institute of Child Health and Human Development, is responsible for more infant deaths in the United States than any other cause in the first year of life.

But the AAP recently updated their infant sleep recommendations in 2016 to include the following in their guidelines for creating a safe sleep environment for baby. According to their national website, "Infants can share a bedroom with parents, but not the same sleeping surface, preferably until the baby turns 1 but at least for the first six months. Room-sharing decreases the risk of SIDS by as much as 50 percent."

Premature infants throw a whole other wrench into the equation. The Mayo Clinic points out that preemies can bring with them certain short-term or long-term medical problems (such as lung problems) arising from the circumstances of their birth. Parents may be instructed by their child's doctor or hospital staff on how to specifically care for their baby when they get home. Healthy Children notes, for example, that doctors might recommend to parents that they position the baby so they can sleep on their side.

With these caveats in mind, and the fact that premature babies could be at greater risk for health problems after coming home than full-term babies (at least within the first 6 months to a year of life) the official answer about co-sleeping with a preemie is that you should strongly consider sharing a room, but not your bed, with your baby.

Exhausted parents everywhere, and especially you preemie parents, we feel you.