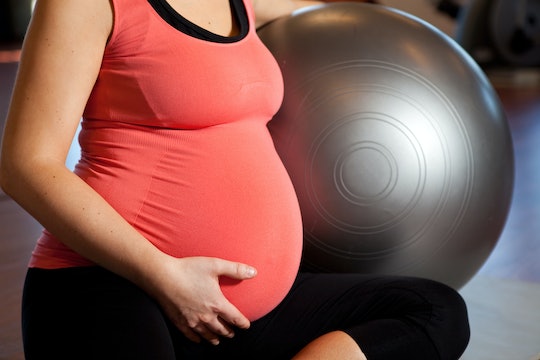 Diet & Exercise Are Safe During Pregnancy, According To A New Study

Bodies go through a lot during pregnancy and many women look for different ways to navigate those changes. Sometimes, women are concerned about weight gain during pregnancy, wondering what is appropriate and if it is safe to exercise. According to a new study, diet and exercise while pregnant is safe, but there are some guidelines every soon-to-be mom should follow.

There's the idea of having to eat for two while pregnant, but as Web MD outlined, that's not really necessary. According to Web MD, the average pregnant woman needs about 300 healthy calories more a day than she did before her pregnancy.

It's impossible to determine an exact amount of weight that someone needs to gain throughout their pregnancy. Both Web MD and March of the Dimes suggested that, for those pregnant with one baby, if you were at an average weight before pregnancy you'd want to gain 25 to 35 pounds and overweight between 15 to 25 pounds. Web MD outlined that women who were underweight should gain 28 to 40 pounds.

Things change, though, depending on personal history, if you're carrying more than one baby, etc. Your medical doctor will be able to give you a more accurate idea of how much weight is healthy to gain, based on your unique body, medical conditions, and other factors.

In a new group of trials funded by the National Institute of Health, researchers showed that pregnant women can safety limit weight gain with diet and exercise. It included overweight and obese women while working across socioeconomic groups, as outlined by Northwestern News.

Seven teams recruited a total of 1,150 participants for the trials, which ran from the second trimester to birth, according to Northwestern News. A reported 579 women had the lifestyle intervention while 571 had standard care. The lifestyle interventions varied for each trial, but aimed to "improve diet quality and reduce calories, increase physical activity and incorporate behavior strategies such as self-monitoring," as outlined by Northwestern News.

Lead author of the study, Dr. Alan Peaceman, said, according to The Indian Express, "This is an important study because it affirms that women can change behaviors to control the amount of weight gained in pregnancy."

However, as The Indian Express noted, the reduced weight gain that averaged about four pounds per women didn't result in fewer complications, such as caesarean sections, hypertension, and diabetes. In addition, Northwestern News reported that it did not change the average birth weight of the baby.

What this study helped highlight was how pregnant women can feel a little more control throughout their pregnancy with diet and exercise. It also helped women were concerned with losing postpartum weight through limiting weight gain and getting into a good exercise rhythm.

It should be said that postpartum weight is not something to be ashamed of. No women is obligated to follow any type or diet or exercise regimen. But for those who want to, it's important to know that there are safe ways to go about it.

For exercises during pregnancy, Fit Pregnancy suggested that pregnant women can do: the plié, plank, curl and lift, one arm row, and a side lying inner and outer thigh exercise.

There are also YouTube videos which feature other pregnant women leading exercises that can be followed at home, such as the one linked above. It is still a good idea to contact your healthcare provider to make sure that these exercises work for you. If you want to participate in anything more intense, it's also a good idea to check with your doctor.

When it comes to fitness, there is no one size fits all recommendation. Everybody's body and, as a result, pregnancy are different. So, if you are interested in changing thing up a bit while pregnant, make sure to consult the appropriate professionals.

More Like This
New Report Shows 80% Of Pregnancy-Related Deaths Are Preventable
What Does Amniotic Fluid Smell Like? A Nurse Explains
Are You Leaking Amniotic Fluid Or Is It Normal Discharge? Experts Explain
How To Increase Your Sex Drive While Pregnant