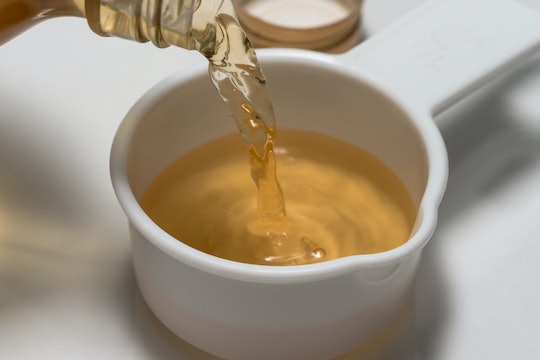 I'll admit, before a few years ago, I never would've even considered just swigging back a shot or two of vinegar. Sure, I've made a million salad dressings in my day, and many feature the much lauded apple cider vinegar, but it never struck me as much of a beverage until I heard about all it could do for me, from helping digestion to aiding weight loss. With so many possible benefits, it's no wonder women want in on the action. But, is it always advisable? For instance, is it safe to drink apple cider vinegar while you're breastfeeding?

There is a real risk when you're looking at certain types of apple cider vinegar. When it comes to raw vinegar, there is a risk of dangerous bacteria living in the raw vinegar which may be passed into your breast milk and from there, into your child, noted MomJunction. However, pasteurized vinegar, which is still full of acetic acid, pectin, and some living bacteria is perfectly safe to consume while breastfeeding, and may even work to settle your stomach if you're battling post-baby digestive issues, or just taken with water before meals to feel fuller for a longer period of time.

Natural and homeopathic remedies are all the rage right now, and given their status as cultural zeitgeist, there is a lot of interest in studies that focus on the possible measurable benefits to these treatments. However, because much of the research is so nascent, a lot of what we hear proclaimed as evidence is entirely anecdotal. Meaning, it could be real, it could be a placebo effect, it could be someone who wants to sell all this vinegar they made when they were trying to make hard cider, and they're making crap up to get you to buy it. A hipster snake oil salesman, as it were. (Beware of the dude with the mustache and 1920s period-style vest telling you about PMS. His PhD stands for "poor hipster dude.")

I'll admit, I'm a bit of a zetetic when it comes to treatments for which a prescription in triplicate isn't required, but I'm trying to be more open-minded. For instance, I just bought hair vitamins, so I like to think I'm coming around. The data for apple cider vinegar that is slowly coming out in the world of medical journals is promising. Even enough that I'd consider it a part of a weight loss plan, or just for general digestive health, but is it safe to drink apple cider vinegar while you're breastfeeding? I wouldn't, and nutritionist Mandy Diaz agrees.

Diaz tells Romper, "It's not worth the risk. While many of my patients argue its benefits, there's too much at stake when you're pregnant or breastfeeding. Pasteurized fermented foods still have significant probiotic benefits and all of the good acids of raw variety. There's simply no good reason not to stick with what we know is safe."

Diaz also advises that no one should just do shots of vinegar, in spite of what you hear from celebrities about doing just that. "It's not good for your teeth or your esophagus. You should really drink it diluted in water or tea to protect the enamel on your teeth and the mucosal tissue of your mouth and esophagus." Personally, I can't imagine just knocking back a shot of vinegar. To be truthful, I once threw up just doing a shot of cheap tequila. I think vinegar might scar me for life.

If you want to jump in on this trend and you're breastfeeding or pregnant, grab the pasteurized bottle and have at it. After your babe is weaned? Feel free to go raw or go home.