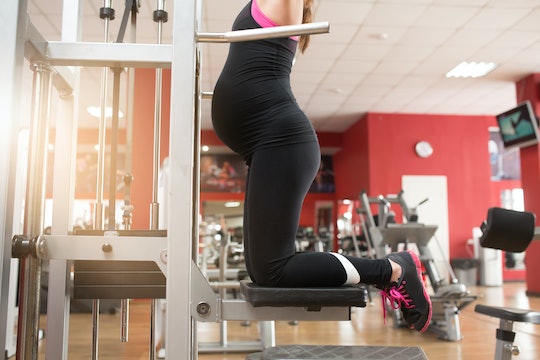 You Don't Have To Give Up Your Workouts During Pregnancy

I was a huge Father of the Bride fan growing up. And, gasp, I loved the sequel even more. I vividly recall the scene between Annie and her mother when they were both very pregnant and exercising. I thought it was great and showed healthy habits, but is it safe to exercise during pregnancy?

According to the American Congress of Obstetricians and Gynecologists (ACOG), for most women, exercise is not only safe, it's encouraged. The ACOG's current guidelines for exercise and pregnancy stated that, provided the woman has been evaluated by her doctor and exercise has been deemed safe, pregnant women should be encouraged to exercise before, during, and after pregnancy. In fact, the ACOG noted that, "A thorough clinical evaluation should be conducted before recommending an exercise program to ensure that a patient does not have a medical reason to avoid exercise."

Healthy pregnant women with uncomplicated pregnancies, according to The March of Dimes, should aim for two and a half hours of exercise per week. They noted many of the benefits of prenatal exercise, like decreased risk of preeclampsia, gestational diabetes, and that it prepares the body for birth. Which, let me tell you, is a workout. As a distance runner who has run over 29 miles without stopping, and as a woman who has had two children, I'd rather run the miles. I don't know how many calories I burned shoving my children out of my lady-flower, but it felt like all of them. Every calorie ever. And they didn't even feed me.

National Association of Sports Medicine (NASM) certified personal trainer and Group Training Specialist specializing in prenatal and postnatal fitness Lindsay Wright of MoveMore Fitness, tells Romper that she is a huge proponent of pregnant ladies shaking their groove thing for forty weeks, citing easier labor, deliveries, and postpartum periods. She says that, for her, being able to work out during her three pregnancies gave her a sense of control in an unpredictable time in her life. You have this belly that you have to keep accommodating, and a life you're preparing for, and the quotidian realities of growing a person — it's easy to see how a few minutes of focused movement would be balancing.

During Wright's pregnancies, she preferred class-based exercises, like bootcamp. She states that she could do most anything, and encourages her mothers to do the same, but avoid the more jarring or jumping workouts in the third trimester, and avoid those exercises which require mothers to be in a prone or supine position.

When I was pregnant, I, too, enjoyed bootcamp workouts. There is something about not having to think about what you're doing next that relieves the pressure of indecision. I also ran and lifted weights. Which, in hindsight, was a fabulous thing, because my son never wanted to be put down. Ever.

The American Pregnancy Association noted that while there's no "target heart rate" to not exceed, pregnant women should not exercise in the heat, or where falling is a risk. They also recommended that you not do any waist-twisting motions while standing, or bouncing while stretching, which seems fairly easy to avoid.

It seems all the experts are very pro-pregnancy fitness and let's be honest, yoga pants are just more comfortable than jeans. This just gives you another excuse to never take them off. But be sure to always talk to your physician before starting any exercise routine and always look out for yoga pants coupons. They get expensive.