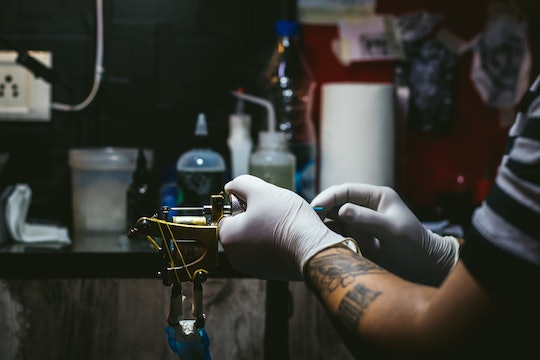 Here's What You Need To Know About Getting Tatted During Pregnancy

Getting inked can be awesome, especially if your tattoo signifies something important. If you're pregnant, memorializing this moment with a tattoo might sound like a great idea, but you may question the effects it could have on your body and baby. Is it safe to get a tattoo while pregnant? As with most situations involving pregnancy, there are things to consider.

According to the American Pregnancy Association (APA), the main risk you need to consider when getting a tattoo during pregnancy is contracting an infection like HIV or Hepatitis B, which can be passed through an infected tattoo needle.

Skin dyes are also a risk worth considering, explained the APA, because there's a chance that tattoo ink can effect the development of your baby during the first 12 weeks of pregnancy. The APA also noted, however, that there's not enough information available to assess the risks. (Basically? Proceed with caution here.)

The safety of epidural injections through tattooed skin are also questioned by some OB-GYNs and anesthesiologists, according to What To Expect, because some believe that pushing pigmented skin into the spinal column may cause problems like growths or infections, although there isn't sufficient information to back up these theories either.

What To Expect also suggested waiting until after your baby is born to get a tattoo, because it can end up looking distorted due to weight gain, weight loss, and stretch marks caused by pregnancy.

Thinking of a henna tattoo instead? The APA explained that henna tattoos are safe, as long as they are made with pure, natural henna, which is never black. Black henna usually has a chemical called para-phenylendiamine (PPD), which can cause long lasting burns, blisters, and other skin reactions that will be hard to treat and diagnose.

Basically? There's a lot of theories surrounding the safety of getting a tattoo while pregnant. If you do plan on getting a tattoo during your pregnancy, the APA advised that you follow certain safety precautions — go to a registered tattoo artist who always wears gloves, keeps a clean facility and sterilizes their equipment, uses new needles for each person, and only uses sterilized inks and dressings.

Waiting might be the way to go, considering the risks, even if they're small and theoretical. It's better to be safe than sorry, especially when you're pregnant. Besides, that pregnancy brain is real — maybe you should wait to make major decisions until after the fog clears. (So like when your kid's 18.)