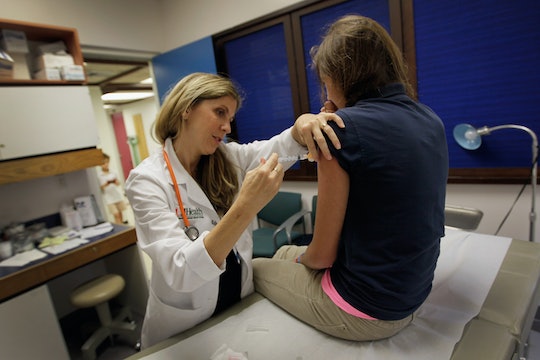 Is It Safe To Get An HPV Vaccine During Pregnancy?

It's not recommended that women receive the life-saving HPV vaccine while they're pregnant. Still, it's not at all unheard of for women be be vaccinated before they even know they're pregnant. Considering the seemingly never-ending list of precautions women must take during pregnancy to ensure their own health and that of their babies, it's easy to think that this would be a major cause for alarm. But, thanks to a recently published study out of Denmark, we now know that it's safe to get an HPV vaccine during pregnancy after all.

Researchers from the Statens Serum Institute in Copenhagen determined that babies of mothers who had been administered the vaccine, commonly known as Gardasil, in the early stages of their pregnancies were no more likely to experience several bad outcomes, the Tech Times reported. By comparing 1,665 women who had been given Gardasil during pregnancy with 6,660 who who were not between 2006 and 2013, they concluded in the study that the babies born to moms in the first group didn't have an increased risk ending up with birth defects or a low birth weight. Those pregnancies were also not any more prone to ending in spontaneous miscarriage, preterm delivery, or stillbirth.

Most people are expected to contract the human papilloma virus at some point in their lives. This makes the HPV vaccine indispensable — not to specifically protect against the virus itself (which it does), but against the serious diseases that it can cause. According to the Centers for Disease Control and Prevention, about 90 percent of HPV infections go away without treatment within about two years. Those that don't, though, could cause cervix, vagina, and vulva cancers in women; cancers of the penis in men; and cancers of the anus and the back of the throat in anybody.

Yikes, right? That's why it's recommended that people get the vaccine in doses between the ages of 9 and 26, and ideally before they start having sex. In most cases, of course, pregnant women have been sexually active already. But the ones who haven't had the vaccine yet may come for it when their pregnancies are so new that they haven't detected them yet.

"It's not that uncommon," Albert Einstein College of Medicine professor Robert Burk, who was not involved in the study, told Reuters of its results. "You're immunizing women in their reproductive window when a good chunk of women are getting pregnant."

Pregnant women are supposed to avoid everything from stress to cleaning a cat's litter box during pregnancy, so the fact that making this mistake is really no big deal is a huge relief. Still, they technically should avoid this, too, if they are unvaccinated and know they are pregnant. That's because the study considered only the quadrivalent version of the vaccine, according to Reuters. The bivalent iteration, on the other hand, was excluded — and there is research (that's been questioned by other research) that indicates that it may lead to a higher rate of spontaneous abortions.

So, moral of the story? Get yourself and your kids vaccinated as soon as a doctor recommends it, but don't freak out if the vaccine schedule accidentally crisscrosses with pregnancy.