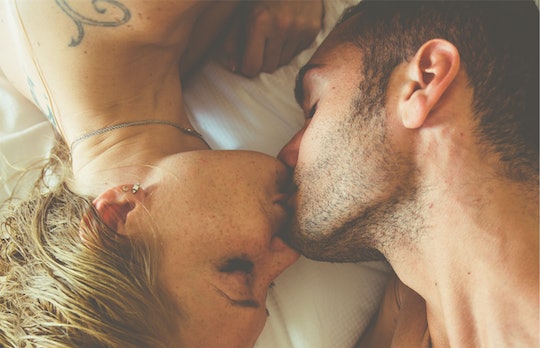 Here's The Deal With Oral Sex During The Second Trimester

There are the pregnancy questions you consider long before that pee test turns positive, and then there are the questions you don't even think to ask until you're well into your pregnancy and experiencing all the nuances that go along with housing another human being inside your body. So if you're wondering whether or not it's safe to have oral sex in the second trimester, know that you're not alone, it's a great question to ponder, and there are more than a few experts that can answer it so you can rest easy and enjoy yourself (wink wink) during those 40, more or less, weeks of pregnancy.

According to Parents, oral sex in the second trimester is perfectly safe, but there are some things you'll want to keep in mind in order to make sure it stays that way. For example, the Mayo Clinic cautions that if you are in danger of going into premature labor, you will likely want to avoid oral sex, as an orgasm can cause premature labor. While most women aren't susceptible to premature labor when they're in their second trimester, you'll want to speak with your doctor about the specific risks of engaging in second-trimester oral sex as it pertains to your unique pregnancy, prior to "diving in," so-to-speak.

Second, you'll want to speak with your partner about his or her technique, so they don't blow air into your vagina when you're receiving oral sex. According to the Mayo Clinic, "Rarely, a burst of air might block a blood vessel (air embolism) — which could be a life-threatening condition for you and the baby." Although, I must take the time to mention that I can't imagine anyone assuming "air blowing" is part of oral sex, let alone a pleasurable one. And if they do, someone, anyone, please educate them.

You can continue to enjoy oral sex long after your second trimester ends, too, but Dr. Terry Hoffman, MD, an OB-GYN at Mercy Medical Center in Baltimore, told Parents that, "As you get closer to D-day, pregnancy hormones and thinning cervical mucus can make things very messy." Just something to consider before you and your partner have some fun between the sheets.

And while oral sex is perfectly safe during all three trimeters of your pregnancy, providing your pregnancy isn't high-risk, according to BabyCenter many women report that sex is actually the best during the second trimester. Fatigue from the first trimester is starting to wean, but you haven't yet become so uncomfortable that sex seems like more work than its worth.

BabyCenter goes on to explain that an increase in blood flow to your genitals and pelvis "may rekindle your desire for sex," providing yet another reason to get it on during your second trimester. The site also reports that women in their second trimester might find it easier to reach orgasm. And, well, that sounds much more pleasurable than morning sickness.

So, what other sex positions are safe during pregnancy? Most sexual positions don't pose any risk to a pregnant woman's health, or the health of her fetus, although there are a few that are more comfortable than others. For example, lying flat on your back can put pressure on the vena cava, according to BabyCenter, which is the main blood flow to the baby. In other words, lying flat on your back during pregnancy should be avoided. Other than that, the sky is the limit, as long as you talk to your health care professional, talk to your partner, and listen to your body.