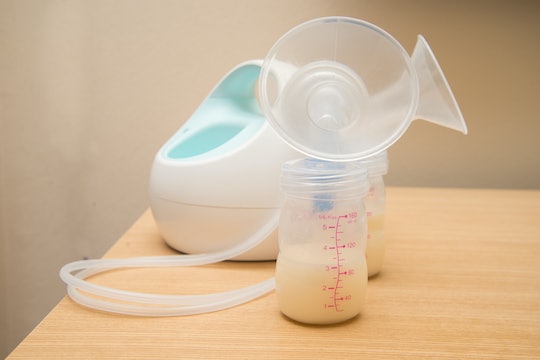 Is It Safe To Induce Labor With A Breast Pump?

As your pregnancy comes to an end, and you're feeling like a bowling ball with little energy to do anything except pray for your baby to come, thoughts of doing whatever you can do induce labor at home have probably crossed your mind a time or two. Many of the at-home methods are laughed off as old wives tales to keep you preoccupied until real labor starts, but many moms swear by them. Nipple stimulation is one such method that actually has scientific backing behind it. But is it safe to induce labor with breast pump? Research suggests it doesn't hurt to try.

According to Belly Belly, nipple stimulation is often used to speed up a stalled labor and even before your labor starts to induce. It's effective because nipple stimulation releases oxytocin, the hormone that causes your uterus to contract before (braxton hicks), during, and after labor. One study in the Cochrane Collaboration found that within 72 hours of using nipple stimulation, there was a drastic increase in women in labor than those who didn't stimulate at all. Stimulation also helped the uterus return to it's normal size after birth and decreased the risk of hemorrhage.

Using a breast pump before giving birth is thought to be a safe way to induce labor (as well as "manual" stimulation by yourself or orally by your partner.) Belly Belly noted that mothers shouldn't stimulate both breasts at once, and should try and mimic an infant sucking by rolling the nipple in between their thumb and forefinger. Stimulate for about a minute, then take a few minute break, then do the other side.

Although it's not guaranteed that your labor will start immediately (in fact, it probably won't for a little while afterwards,) it helps to know that you're doing something proactive to get that little proverbial bowling ball rolling.