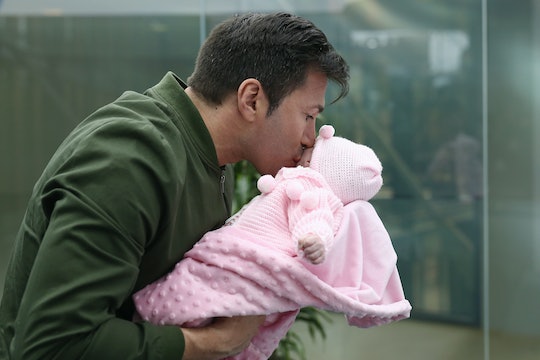 Kissing A Baby On The Lips Can Actually Be *Very* Dangerous, Science Says

Babies are pretty irresistible. They're just so smushy and adorable, it's only natural to shower them with tons of affection and love. For many of us, that means kissing. I know I still can't pass my children without a kiss to the cheek or the head — it's as instinctual as breathing for me — and I plastered my babies with kisses. But is that OK? Is it safe to kiss your baby on the lips?

As it turns out, kissing a baby on the lips can be very dangerous. Last year, an 18-day-old baby died after being kissed on the lips by a relative who was infected with the Herpes Simplex Virus. Her condition quickly became critical, with the infection morphing into a case of viral meningitis, according to CNN. Dr. Tanya Altmann, a pediatrician at Calabasas Pediatrics in California, told CNN, "The first two months after a child is born are very critical, as a virus can rapidly spread and cause serious illness in newborns." And since a virus can be spread before there are obvious signs of an infection and the carrier is diagnosed, it's better to be safe than sorry and avoid kissing your baby on the lips or allowing anyone else to do so, especially during the first couple months.

It's not just kissing, either. If you'll recall a few years ago, an interesting way of feeding your baby made the rounds on the internet thanks to celebrity Alicia Silverstone of Clueless. She reportedly fed her babies like little birds, according to Daily News, chewing up the food and spitting it into her baby's mouths. She defended the practice saying that this practice, commonly referred to as "premastication," has been practiced for thousands of years, and her son benefitted from it.

Well, according to recent research published in The Journal of the American Sexually Transmitted Diseases Association, this is not an advisable practice. In fact, it turns out this is a pretty easy way to transfer sexually transmitted diseases like syphilis, and that can spiral from there into worsening infection.

It seems as though any mouth-to-mouth interaction could be a cause for concern, but according to the website KidNurse, nurse Dani Stringer advised the following: "Speaking ideally, it is best to ask your friends and family to not kiss your baby, especially under the age of 2 months while their immune system is immature and still developing." It may not sound like a big deal to some, but she explained, "Somewhere between 1 in 3,200 babies to 1 in 20,000 babies develop a neonatal herpes infection. Of that, somewhere, between 15-30 [percent] are caused HSV type 1. Of all these neonatal herpetic infections, only 10 [percent] of infected babies contracted HSV after birth." Sure those numbers don't sound too scary, but when it comes to raising babies, really anything can happen.

The research would suggest that caution is applied when it comes to kissing babies, especially in the early period following their birth. Babies under two months of age are under the greatest risk for contracting some type of disease from mouth-to-mouth kisses. After that period is up, it's up to you to weigh the risks and decide. I'll admit, I do kiss my little one on the lips — that's just how she does it. However, it's only her parents and her grandparents that she kisses this way. Everyone else gets a kiss to the cheek — or nothing at all.

Is it safe to kiss your babies on the lips when they're older? According to Parents Magazine, the risk is greatest when they're younger, so it might be ok when they're a bit older. It really is up to you to decide how to approach kissing your kid on the lips as their immune system develops, but for the itty bitties, you might want to keep your lips to yourself.

More Like This
What Is RSV?
How To Get Boogers Out Of A Baby's Nose
Here’s Your Guide To Paced Bottle Feeding
Experts Explain Whether It’s Safe For Your Baby To Sleep On Your Chest