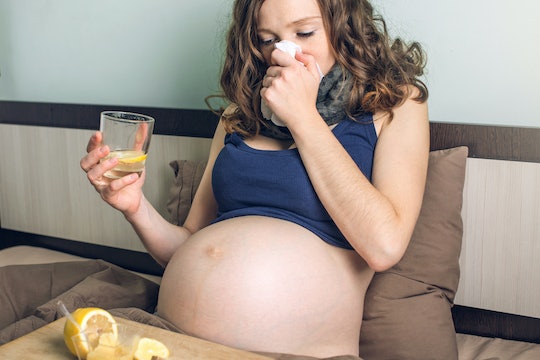 Is It Safe To Take Benadryl While Pregnant, & If So, How Much?

I must admit, I don't take medication often. OK, maybe an ibuprofen here or a Tylenol for a headache there. But when I do, I don't think much of it. I just pop one or two with a drink of water and go about my day. When you're pregnant, though, you need to think before putting ingesting anything, including medications. If you suffer from allergies, you might be wondering is it safe to take Benadryl while pregnant, and if so, how much? Before you find the answer, know that simply asking yourself (and your doctor) this question is a step in the right direction.

The good news for you and your congested head is that it is safe to take Benadryl while pregnant, according to Parents, but only if you really need it. The Food and Drug Administration (FDA) assigned the pregnancy category B status to Benadryl, as stated in American Family Physician, which means there are no known side effects and it's safe to use during pregnancy

There are still a few things you should consider before you take Benadryl, or any other over-the-counter (OTC) medication when you're pregnant. First, consult your primary care physician before taking any medication while you're pregnant, and especially during the first trimester. According to America Family Physician, "At least 10 percent of birth defects are thought to result from maternal drug exposures." Thankfully, American Family Physician also reports that "estimated that up to 60 percent of patients consult a health care professional when selecting an OTC product." Yes, that number could be higher, but it's a start.

According to the American Pregnancy Association (APA), it's actually common for pregnant women to take Benadryl, courtesy of those lovely hormones that can change a soon-to-be mom's skin. The APA reports, "Hives during pregnancy are less common, but they do happen frequently." Because "pregnant women can face more serious bouts of itchiness, hives, or rashes," according to the APA, "there are several antihistamines that are considered safe to take during pregnancy such as Allegra, Benadryl, and Chlor-Trimeton, Claritin and Zyrtec." But, of course, the APA also reminds women to consult with their physician prior to taking any medication.

So, how much Benadryl is safe to take while pregnant? The recommended dose on the package should be safe, provided your doctor hasn't given you advice that tells you otherwise. According to WebMd, Benadryl, Claritin, and Rhinocort are all allergy medications that are safe to take while pregnant in the prescribed dosage. However, WebMd recommends that you definitely seek the guidance of your doctor before taking any of those allergy medications in your first trimester. (Sensing a pattern, yet?)

You'll also want to keep an eye on which kind of Benadryl you pick up from the pharmacy. Nowadays, there are many different incarnations of Benadryl, like Total Benadryl Extra Allergy and Sinus, which contains pseudoephedrine, which may increase the risk for fetal malformations such as gastroschisis, according to American Family Physician. On the other hand, topical Benadryl cream contains a lower dose and will allow less of the medicine to enter your blood stream.

Keep in mind, that no medication can be guaranteed to be 100 percent safe during pregnancy, so you'll only want to take medication if you absolutely need it and with permission from your doctor. While Claritin and Benadryl are reportedly safe to take, The Bump reports you'll want to stay away from Sudafed when pregnant, which can cause birth defects with the abdominal wall.

There aren't many natural remedies for allergies, but prevention might help you from suffering as badly. Parents recommends preventing allergy symptoms by "wearing a mask when you dust or vacuum, keeping pets out of your bedroom, and protecting your mattresses and pillows with special covers to keep out dust mites." If you have problems with dust and mold, try using a dehumidifier to keep the air in your home under 50 percent to lower the risk of both.