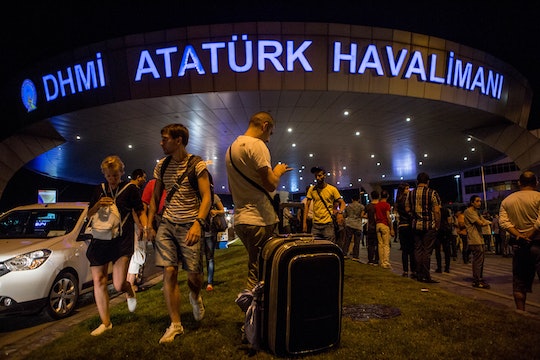 Is It Safe To Travel To Turkey? Travelers Should Be On Alert

A deadly suicide attack late Tuesday at Ataturk airport in Istanbul killed 41 people and injured more than 230 more, leaving people all over the world wondering, is it safe to travel to Turkey? According to The Daily Mail, Turkish Prime Minister Binali Yildirim issued a statement early Wednesday, stating that the airport had been reopened following the bombings, and that service had been restored as usual, which was surely welcome news to anyone who was looking to leave Turkey and return home. But in the wake of the terrorist attack — which closely resembled the one that took place in a Brussels airport in March — experts are reminding travelers that airports are "soft targets" for terrorism, and that they should be on alert and aware of any travel advisories in effect for the area they are planning to fly to before making travel plans.

According to The Telegraph, the Ataturk airport is the third busiest airport in Europe, making it a major transportation hub vulnerable to terrorist attacks — one which Turkish President Recep Tayyip Erdogan said should serve as an important wake-up call, according to BBC News. While it might be easier to dismiss the attack as more Middle East violence versus an attack on the West, Erdogan emphasized that "the bombs that exploded in Istanbul today could have gone off at any airport in any city around the world."

International security expert Raffaello Pantucci agreed with that assessment, and explained to The Daily Mail that,

Airports have always been soft targets for terrorism groups. They represent aviation, and aviation represents transportation. Aviation is one of the main arteries of the planet, it is how the world is connected. By striking an airport, terrorists are striking the international economy and they know they are guaranteed to get attention - and that there will be citizens present.

Turkey, however, has also been particularly vulnerable to terrorist activity this year, with the Ataturk attack representing only one in a number of recent attacks in the country. According to The Telegraph, Turkey is currently in the midst "of a terrorism crisis" concerning both the Islamic State and Kurdish militants, the PKK, and has been under travel advisories for much of 2016. The U.S. Department of State has since updated its most recent travel advisory for Turkey, recommending that U.S. citizens "avoid travel to southeastern Turkey," where proximity to the Syrian border makes the climate particularly dangerous. It also warns travelers to "exercise heightened vigilance and caution when visiting tourist areas," to stay alert in large crowds or events, and to avoid "political gatherings or rallies" that could become terrorist targets.

Britain's Foreign & Commonwealth Office has reminded British travelers (an estimated 2.5 million who travel to Turkey each year, according to The Telegraph) that while it is generally considered a safe destination, the threat for terrorism is relatively high:

The FCO has specifically warned against travel within within 10 km of the Syrian border and the city of Diyarbakir, and that travel to "Sirnak, Mardin, Sanliurfa, Gaziantep, Diyarbakir, Kilis and Hatay provinces Siirt, Tunceli and Hakkari" occur only if essential.

Any travelers with flights booked for Istanbul may want to contact their travel provider to discuss their options — though, according to The Telegraph, since there is no express advisory to avoid Istanbul entirely, there will likely be a fee involved with canceling or changing travel plans. Travelers who are already in Istanbul should verify their travel plans with the airline they are flying with, or contact their local consulate if they are in need of assistance.