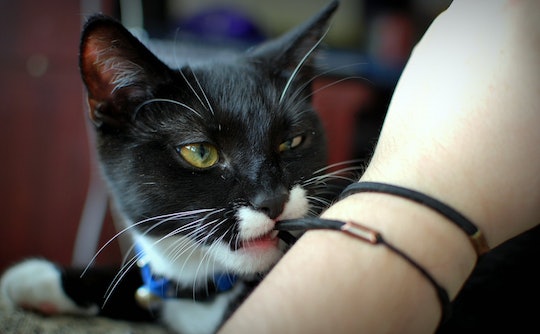 Is It Safe To Wear A Hair Tie On Your Wrist? This Girl's Story Might Make You Reconsider The Habit — PHOTOS

I think we’ll file this story under the Terrifying Questions You Never Thought You Needed To Ask: Can you get an infection from wearing a hair tie on your wrist? Turns out, yes, because the world is a mean and nasty place that wants our hair perpetually in our eyes. A woman in Kentucky ended up having to undergo surgery, after developing three different types of infections, most likely due to wearing a glittery hair tie on her wrist. According to doctors, bacteria from the hair tie mostly like got into the woman’s bloodstream via her pores and hair follicles.

Pardon me while I take a brief break now go take off the hair tie that’s currently on my wrist. I’ll let you do the same.

According to the reports, when Audree Kopp first saw a small red bump on the back of her wrist, she assumed it was a spider bite. However, the bump continued to grow in size, prompting Kopp to visit a doctor, who put her on antibiotics. When the antibiotics didn’t improve things (and, in fact, the bump continued to worsen) she went to the ER, where she was told she’d need surgery.

(Ah, I see that the rest of you that were still wearing hair ties on your wrists have now taken yours off as well. Welcome to the fearful fold, friends. Come on in, we have plenty of hand sanitizer.)

Turns out, she had staph, strep, and one other infection, all of which could have very easily combined and turned into sepsis, a severe degree of infection that can sometimes result in coma and even lead to death. From a hair tie. Luckily, actually had the abscess treated (by having it drained of pus; this story just gets cuter and cuter) just in time.

So, you know hair ties. If you're a person with long hair, chances are you've got one around your wrist right now. Look at these handy, "harmless" little things:

This girl thought they were harmless too, until a glittery one created an infection under her skin that required actual surgery.

So before you panic and commit to a hair-down lifestyle permanently, you should know that apparently not all hair ties will necessarily cause this kind of infection. It's best to use the kind that are easily washable, so that they can be cleaned regularly. I know, there's one more thing you have to do today.

Back to disgusting business. This is the abscess Kopp needed surgery on:

I'm sorry. I can't unsee it either, if that helps.

The more you know, right? If you need me, I'll be busy digging for hair ties at the bottom of my purse. (Where else would I possibly choose to keep something that I always need but can never, ever find?)

More Like This
How Much Hair Loss Is Normal? 9 Signs You’re Losing Too Much Hair
The Best Halloween Family Pajamas To Match Your Boos
13 Nursing Bras & Pumping Bras You'll Actually Love To Wear
The 16 Best Affordable Maternity PJs & Lingerie Sets On Amazon