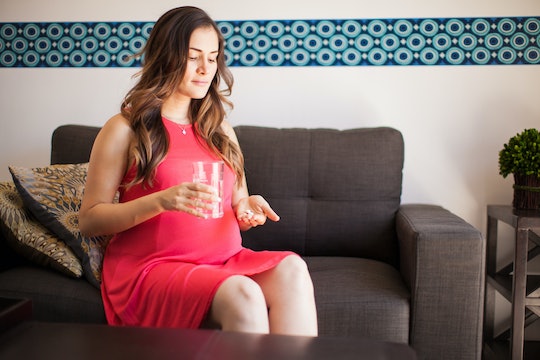 What Experts Want You To Know About Using It Works! Fat Fighter During Pregnancy

With the onset of products being sold by your social media friends these days, it's hard to know what's real, what works, and what's safe. It Works! is a company that grew popular with its line of "body applicators," a wrap system that claims body contouring results without surgery. The company soon expanded and started a supplement line, including a product called Fat Fighter. Fat Fighter claims to have "naturally based ingredients" which block carbs and fat from your meals. Sounds pretty great, right? But, is It Works Fat Fighter safe to use while pregnant?

According to the It Works! website, "Advanced Formula Fat Fighter will absorb some of the fat and carbohydrates from your food so that your body doesn’t." The supplements consists largely of Chromium (a supplement claimed to reduce body fat), NeOpuntia (a ingredient made from prickly pear cactus said to block fat), and a proprietary blend of other ingredients, including caffeine.

The research on the efficacy of both Chromium and NeOpuntia is lacking. According to the Office of Dietary Supplements of the National Institute of Health, a review of 24 studies on the effects of Chromium in relation to body mass and composition yielded no significant results. The effects of caffeine on pregnancy is more readily researched, but still conflicting. The general recommendation is to consume under 200 milligrams of caffeine daily when pregnant, according to the American Pregnancy Association. If the amount in Fat Fighter is as claimed (110 milligrams), taking the supplement, as well as a daily cup of coffee, would put you over the recommended daily amount. Research on NeOpuntia is less available.

According to Dr. Lakeisha Richardson, OB-GYN, it's simple — It Works! Fat Fighter is not safe in pregnancy. "The amount of chromium in two pills exceeds the daily recommended dose that is safe in pregnancy," she tells Romper.

"Also, even the company acknowledges that they do not know at this time what the recommended daily doses of NeOpuntia and the Proprietary Blend (Garcina Cambogia) should be," Richardson continues. "More research and data are needed before such supplements can truly be regarded as safe in pregnancy, as well as for the general public."

Here's the thing: just because something is natural, doesn't mean it's safe. And, if something seems too good to be true, it likely is. When it comes to pregnancy, it's better to err on the side of caution. If you're truly worried about your fat and carbohydrate intake, talk to your doctor about how to be healthy without taking a pill. Otherwise, eat that pasta and enjoy yourself.