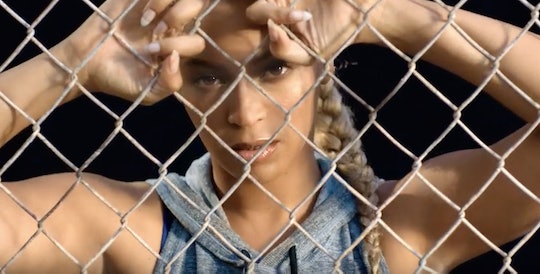 Is Ivy Park A Real Place? Beyonce's Fashion Line Was Inspired By Runs With Her Dad

Your yoga pants just got a lot cooler. Beyoncé has been teasing fans for more than a year with the promise of an athleisure line, and Thursday she made the big reveal with a video announcement and Instagram devoted to the label, Ivy Park. The images are powerful and sexy and the video tells the story behind the inspiration for Ivy Park. Is Ivy Park a real place? Yes, it's the park where a young Bey and her dad used to run every morning, according to the first ad for Ivy Park. But you won't find it listed online with the name Ivy Park. Instead, fans have to find the clue in her video to locate the real park from Beyoncé's childhood.

"I would wake up in the morning and my dad would come knocking on my door and tell me it's time to go running," she says in the video over a shot of street signs showing the corner of Rio and Parkwood. "I remember I wanted to stop, but I would push myself to keep going."

Then, the video shows a series of the most glamorous shots of her on a treadmill, in a pool, and working out with her dance squad. She looks incredibly collected and confident, and it might be tough to top her cool factor. But that's not going to step legions of women — including myself — from wrapping ourselves in a little Ivy Park lycra for the gym. You know, before we get in formation, and the grocery store checkout line.

She says the park has become more than just her childhood lesson on discipline and drive running along with her father by her side. Ivy Park, Beyoncé explains, is a state of mind. The place she still goes inside herself to find her strength. So maybe Ivy park isn't a real, live place after all? But, then, in a flash, the camera shows the sign of the actual park in her hometown in Houston, Texas, that inspired the "Ivy Park" state of mind and clothing line, and it appears to be called "Parkwood Park."

So, there you have it. Mystery solved. Once you get your hands on a few pieces from the new Ivy Park line, which debuts April 14, head over to Parkwood Park in Houston and jog around just like Beyoncé. Maybe there's a little magic in that spot.