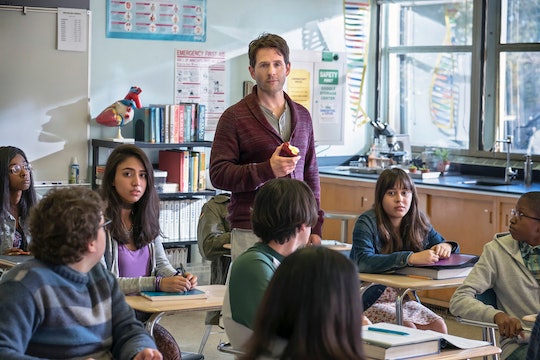 NBC's new comedy, A.P. Bio is like School of Rock meets Bad Teacher. The series stars Glenn Howerton as Jack Griffin, a disgraced Harvard philosophy scholar who loses out on his dream job of being the Head of Philosophy at Stanford and ends up teaching Advanced Placement Biology at a high school in his hometown of Toledo, Ohio. But is Jack from A.P. Bio based on a real person? Hopefully not.

There thankfully isn't evidence that Jack is actually based on a real human person. Instead, he seems to be purely the fictional creation of show creator and executive producer Mike O'Brien, a Saturday Night Live alum. The show is also executive produced by Lorne Michaels and Seth Meyers, so it's a whole SNL team behind the series, which will kind of give you a hint to what kind of humor to expect from the series.

However, whether you're a longtime watcher of SNL or not, A.P. Bio is certainly its own show and it definitely looks like it could be a new comedy hit for NBC. As a high school teacher, Jack is definitely not qualified to be taking care of kids on a day-to-day basis. He makes it clear in the trailer that he has no intention of actually teaching his students biology, but instead wants to use them to get revenge on his academic rival Mike Leonard.

It's obvious that Jack believes he's too good to be a high school science teacher, and treats the job as such. He tells his students there's nothing they could ever possibly teach him because he's smarter than them. He tells the other teachers how sad it is to working at a high school in Toledo. He even walks out of his class, leaving his students unattended, believing that if they're old enough to get pregnant then they're old enough to be left to their own devices.

Thankfully, there is another character there to reign Jack in a bit. Principal Durbin, played by Patton Oswalt, seems to be onto the fact that Jack isn't exactly doing his job. Hopefully, he'll be able to pull Jack back into line, but that seems unlikely. No doubt Jack will be able to talk his way out of any trouble he gets into and continue to "teach" these kids however he sees fit. That apparently includes having them learn a British accent so they can prank call Miles and act like his birth mother (he's adopted) and reveal some earth-shattering secret to him.

Although it seems some of the kids will actually be fine with Jack's teaching lessons (honestly what high school student wouldn't want a free period?), others definitely won't be. One student asks in the trailer, "What even is this class?" But it's Sarika, played by newcomer Aparna Brielle, that looks to be the real thorn in Jack's side. It's clear she actually cares about learning biology, which is totally her right as a student, and will call out Jack for not actually doing what he was hired to do. But will Sarika be able to get Jack into trouble, or will they be able to come to some kind of truce? You'll just have to tune in to see.

The series also stars Lyric Lewis, Mary Sohn, and SNL's Vanessa Bayer will guest star in the pilot, which isn't all that surprising with the SNL team behind the series. Perhaps there will be even more SNL guest stars popping up during the season.

You can catch a special preview of the pilot of A.P. Bio this Thursday, Feb. 1 at 9:30 p.m. ET on NBC, before the series really begins in March.