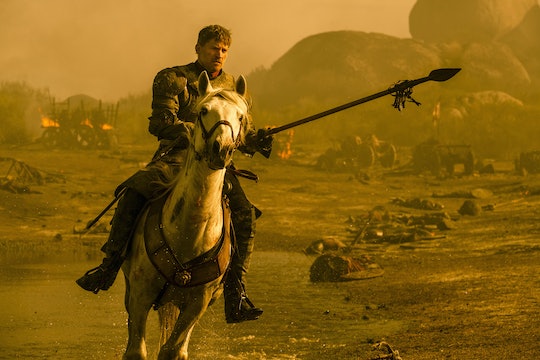 In the fourth episode of Game of Thrones Season 7, "The Spoils of War," Jaime Lannister took a plunge headfirst into a lake to avoid becoming the pièce de résistance at Daenerys' welcome home barbecue. Weighted down by his armor and his golden hand, Jaime may have sunk to the bottom before he had a chance to save himself, switching out one awful death for another. To survive he'd have to be someone very special — like a legendary warrior who hasn't yet fulfilled his destiny. That begs the question: is Jaime Lannister Azor Ahai on Game of Thrones?

Let's pause a moment for a quick reminder: Azor Ahai was a warrior who fought thousands of years ago in Westeros to end the Long Night and defeat the White Walkers. Also called the Prince That Was Promised, he's an important figure in the religion of R'hllor, which is why Melisandre brings him up most often. In A Storm of Swords, she offered up some of the key markers that can be used to identify the second coming of Azor Ahai: "When the red star bleeds and the darkness gathers, Azor Ahai shall be born again amidst smoke and salt to wake dragons out of stone."

Azor Ahai also possessed a flaming sword called Lightbringer that he forged by sacrificing his wife Nissa Nissa: its power was gained in part due to him stabbing her directly in the heart with it. That sacrifice is a part of his story that might come into play when considering which of the current characters is the Prince That Was Promised.

But how does Jaime stack up?

In the show, it seems like most of the evidence linking Jaime to Azor Ahai is still to come. For example, his near death experience in the lake (if he survives) could be his rebirth amidst smoke and salt — the smoke of Drogon's fire and the salt of the water. Blogger Dorian the Historian pointed out that the red star of the prophecy need not be literal, either; it could refer to the sigil of House Martell, which is a red sun. The red sun bleeding could be the murder of Elia Martell during sacking of King's Landing, but it could also refer to Oberyn Martell, whose death had a direct impact on Jaime's family since it led to Tyrion being forced to flee from Westeros after being found guilty of Joffrey's death.

One Reddit user, byrd82, pointed out that a mistranslation (much like the one made on the show that revealed the Prince That Was Promised was a gender-neutral title) could actually link Jaime to the prophecy, too. "Valyrian words for gold and hand are aeksion and ondos," they wrote. "Valyrian words for lord and light are aeksio and onos. Could a translation error have led to the erroneous creation of a religion? Will the true savior be the 'Gold Hand'?" If so, only Jaime would fit the bill.

Another possible hint that Jaime is Azor Ahai calls on the legend of Nissa Nissa's sacrifice. Before killing his wife, Azor Ahai attempted to temper the sword twice before: once in water and once in the heart of a lion. Jaime possesses Joffrey's Valyrian steel sword Widow's Wail, which could have been metaphorically tempered twice before under similar circumstances. Widow's Wail was created from Ned Stark's sword Ice, melted down and reformed; this could be water, as that is what Ice refers to.

The second tempering could be the death of Tywin (a lion if ever there was one), even though Jaime himself did not commit the act. As Reddit user baglebros pointed out, Cersei explicitly blames Jaime for his actions leading to Tywin's death. The third metaphorical tempering, in Nissa Nissa's heart, could be Jaime killing Cersei, which has long been a fan theory.

Dragons are also an important part of the Azor Ahai myth that seems to have nothing to do with Jaime at first glance. However, some fans have theorized that Jaime and Cersei are actually the bastard children of Aerys Targaryen (there are a lot of secret Targaryens running around Westeros, apparently). Aerys was reportedly obsessed with their mother Joanna Lannister and may have raped her on her wedding night to Tywin, leading to her conception of the twins. It's a little far fetched, but it would explain that penchant for incest, which is a Targaryen trademark.

Prophecies are purposefully vague, which means it's possible to see things in the evidence that you want to see. Still, there seems like an awful lot that could be linking Jaime Lannister to Azor Ahai.