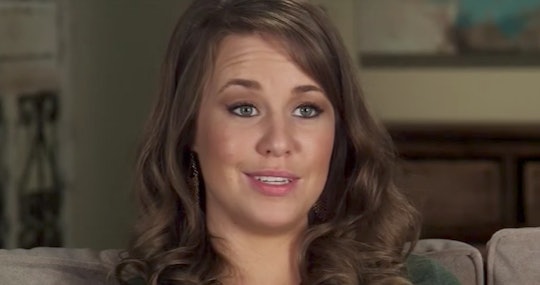 The extra-big, ultra-conservative Duggar family is constantly expanding. The stars of 19 Kids and Counting and spin-off Counting On are all about their Christian faith, marriage, and having children "according to God's plan," so it's no surprise that fans are wondering if eldest Duggar daughter Jana Duggar is engaged. Recent rumors have linked her to a family friend, although neither of the parties have said much about the reports publicly. It seems likely that Jana isn't engaged, but she could be "courting." If this new rumored beau is actually her boyfriend, he could cause some controversy since, apparently, he's a little more liberal than the Duggars are (which probably still means not very liberal at all).

The rumors all started with a photo of the Duggars at dinner. A family friend named Caleb Williams was there too, leading fans to speculate that he and the 27-year-old Jana were courting. It's not a lot to go on, but fans know that the Duggars have a lot of rules about unmarried women hanging out with unmarried men. For example, when Duggar children are courting, dates are chaperoned by the parents in order to "keep things from going in the wrong direction," Duggar dad Jim Bob told E! Online, and parents are CC'ed on text exchanges.

So if Williams is indeed aiming to get serious with Jana, how would he fit in with the famous family?

Radar Online reported that Williams is not necessarily one to follow all of the Duggar's strict courtship rules. A source told the website that Williams doesn't really adhere to Duggar rules like only holding hands and doing side hugs instead of full chest-to-chest contact before the wedding. That same source also said that Williams does not attend the same church as the Duggar family, which could cause problems, explaining:

Every religion has its own sects and groups. They have similar belief systems, but he’s a bit different in his thinking. He’s maybe somewhat more liberal.

But remember, it's only one photo. And fans have been wrong before in their rush to link Jana to any man of marriageable age in her vicinity. They even linked her to Williams's brother Jacob, another family friend, who vehemently denied the rumors in a Facebook post, writing:

So yeah I just wanna say that this is total bunk. WE ARE NOT IN A RELATIONSHIP. Lol we've been friends for 21 years and all of a sudden! BAM! We just happen to be in the same picture, so of course, the media has to make up a story about it to sell. So I'm here to clear the water ... it ain't true! Moral of the story? Don't believe what you see online.

If Williams is not the one for Jana, whom fans have affectionately nicknamed Cinderella for how often she ends up caring for her younger siblings, she'll just keep waiting for the right guy. As she said in an episode of Counting On,

I know how it feels to wait for ‘Prince Charming’ to come along. I’m still waiting. Waiting is not always easy, especially in those times when all the married siblings are getting together and you can’t go along because you’re not part of ‘that’ group.

Jana is only 27. Sure, many of her younger siblings are already engaged, married, and having children of their own, but 27 is still plenty young. The Duggar family may have a lot of rules, but hopefully they'll be supportive of their daughter deciding to be a little (rightfully!) picky, and forge her own path.