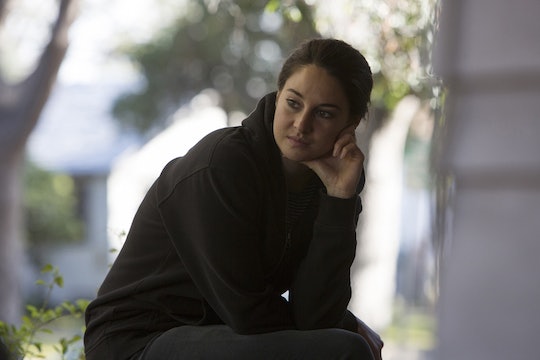 As Big Little Lies progresses, we can't help but put our detective hats on. Since we found out about the murder mystery in the premiere, fans have started looking for clues as to who the unlucky victim is and who hated them so much that they would commit actual murder. One possible victim is Jane Chapman, the young single mom who just moved to Monterey. While she doesn't have the history that the other parents share, she's already made some enemies pretty quickly. So is Jane dead on Big Little Lies? Madeline loves her, but others... not so much.

Let's backtrack a little: murder, what now? In a small California town, with a bunch of first grade parents? Yes, that's exactly what goes down in this community — during a school Trivia Night, no less. In the first two episodes, fans were just given the information that someone was murdered and no indication of who the parties involved could be.

From the onset, though, we know tensions are high. While Jane is new to Monterey, she soon became the adversary of Renata, a working mother who's the definition of a "helicopter parent." On the first day of school, Renata's daughter, Amabella, accused Jane's son, Ziggy, of choking her. Like any mother would, Renata immediately turned on Jane and Ziggy. When Ziggy didn't apologize (claiming he was actually innocent), Renata vowed that justice would be served.

This brings up the possibility, then, that Renata could go to the extreme and kill Jane. There's also the element of Jane's mysterious past: we see flashbacks of her going through an ambiguous trauma. Could the person that did that to her end up killing her? For those of us who read the novel on which Big Little Lies is based, we know how this all really plays out. (Warning: major spoilers from the novel ahead!)

If the show sticks to the book version, fans will eventually discover that it's Perry who actually gets murdered — though Jane is definitely still involved, in a way. As it turns out, he is the man who assaulted Jane (which resulted in Ziggy's conception). The reveal of Perry's true identity leads to a chain of events. Bonnie, who suffered PTSD from trauma of her own, kills Perry because of the violent, evil person he is. So while Jane was neither the victim nor the killer, her narrative played a big part in the event.

According to writer and producer David E. Kelley in an interview with Variety, much of Big Little Lies remains true to the book. We can assume, then, that Perry dies in the series as well, but for now we can still wonder if the series will take a sharp turn.