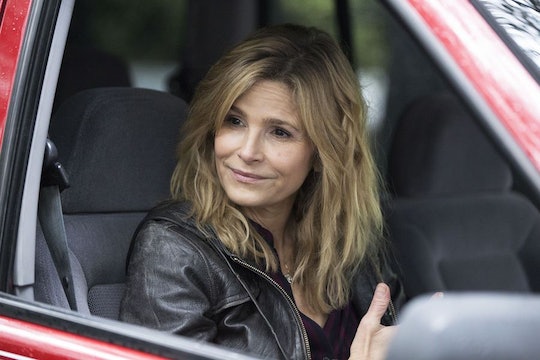 One of ABC's most anticipated new shows this fall is a 10-episode limited series from Rookie Blue creator Tassie Cameron called Ten Days in the Valley. It stars The Closer alum Kyra Sedgwick as Jane Sadler, an overwhelmed producer on a controversial cop drama whose life begins to imitate art when her young daughter Lake is kidnapped. The next 10 episodes play out over 10 days (hence the show's title) as bombshells about Jane, her coworkers, and her family drop one by one. So is Jane Sadler from Ten Days in the Valley a real person? Not exactly, but she does have some very real-life inspiration.

By this point, you've probably put together that this series about a fictional showrunner on a cop drama comes from a real-life showrunner who used to work on a successful cop drama. Cameron wrote Ten Days in the Valley based on a recurring nightmare she had, which viewers can see play out in the trailer. Jane, a single mom who has an acrimonious relationship with her child's father, gets a call from the studio in the middle of the night demanding rewrites due by 4 a.m. She leaves her daughter alone in the house while she goes out back into her writing shed to complete the pages. But when she walks back to the house, she finds the back door locked and her daughter missing from her bed, nowhere to be found.

In a TCA panel, Cameron revealed that she wrote the series at her therapist's behest as a way of processing "[her] pressures about being a stressed out single mother," adding, "It was amazingly successful. Very cathartic."

Of course, Jane is not a perfect victim. Given the stress of her job, she relies on substance abuse to cope with the expectation of being brilliantly creative on command. She also steals storylines from real-life interactions she has with friends without their consent, and viewers see this blow up in her face at least once in the trailer.

Cameron freely admitted that she felt insecure about offering up a character in whom audiences need to be invested for the show to work, while also assigning her so many "unlikable" attributes in the interest of authenticity. "When we talk about a flawed or a complex female character, I had to go through a lot of soul-searching to be able to write a character this complicated," she said on a panel at the Tribeca TV Festival, according to The Hollywood Reporter. "It took a long time before I felt brave enough to share it with anybody."

Sedgwick, who was also on the panel, expounded on the themes taken on by the show: "We explore slut-shaming. We explore how difficult it is for people to deal with a powerful woman who doesn’t apologize for her sexuality." And when asked whether she believes Jane is a good mother, Sedgwick clapped back, "Did we ever ask if Walter White was a good father?"

It's clear that Ten Days in the Valley will take on some of the most brutal forms of mom guilt as Jane is forced to acknowledge her own complicity in her downfall, while also searching for ways to forgive herself, and learn to stop beating herself up for things not in her control. As far as the show's format, the production team promises a satisfying ending to the missing child storyline in the first season, while setting up Jane's complicated life, a duplicitous writers' room, and police corruption for possible Season 2 material.

"It’s really hard to do 22 good episodes," Sedgwick admitted of typical network series orders. (Louder for the people in the back.) So hopefully, this show benefits from a more tightly crafted format.