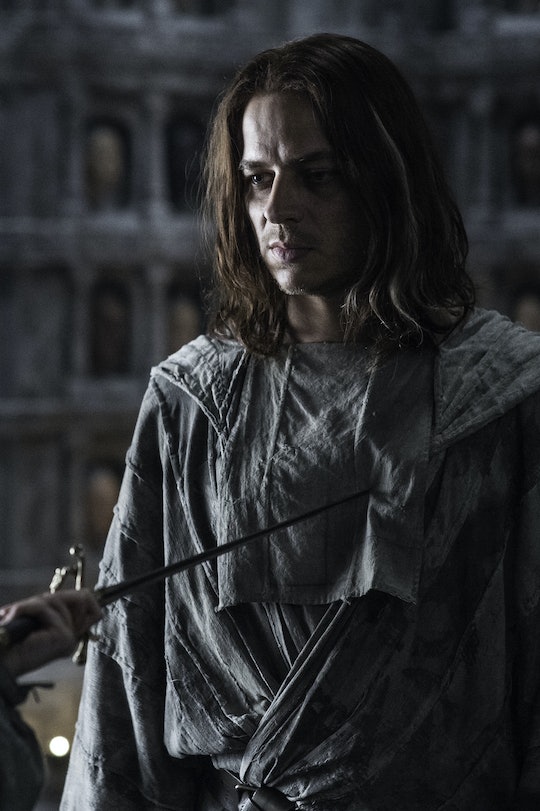 Is Jaqen Actually Syrio on 'Game of Thrones'? There Was A Huge Clue This Season

Arya Stark has survived The Waif's assassination attempt, murdered her would-be killer, and reclaimed her identity in lieu of joining The Faceless Men to journey home to Winterfell. All of this is great news, but the chase scene between Arya and The Waif contained a huge clue that implied a certain water dancer's return to the show. The last time we saw Syrio Forel, The First Sword of Braavos and Arya's combat teacher, he was about to die at the hands of Meryn Trant. But is Jaqen actually Syrio on Game of Thrones? While the theory doesn't work in the books, it could hold up in the television series.

We all assumed Syrio died protecting Arya in Season 1 when the King's Guard was hunting down all the Starks in King's Landing. But we never actually saw him die, and considering he beat off a handful of knights with only a wooden sword, it's not totally implausible that he figured out how to disarm Meryn at the last moment. Jaqen enters during Season 2, when he is pulled out of the black cells in King's Landing and loaded up in a cart to be shipped off to The Wall, along with Arya disguised as Arry. The other two men in the cart with him are very frightened of him, we know Jaqen can change his appearance, the House of Black and White is a temple to the God of Death, and Syrio's favorite saying is "What do we say to the God of Death? Not today." Plus, both Jaqen and Syrio hail from Braavos.

As the theory goes, Syrio was taken prisoner instead of dying, and then changed his appearance sometime between when he was taken captive and when Arya meets him as Jaqen. This explains why other prisoners would be frightened of him, and his out-of-the-blue fondness for Arya. Tom Wlaschiha, who plays Jaqen, teased to The Hollywood Reporter that his return to the show is significant:

While the theory doesn't work in the books, for various and complicated reasons, the simplified TV version works out just fine. And check out this mysterious figure in the background of Arya and The Waif's chase scene:

Does that shadowy figure behind The Waif look like a certain luscious-haired, Braavosi-dressed gentleman we've come to know and love?

The only remotely weird part of this theory is how mean Jaqen was to Arya this season, contrasted with how supportive and kind Syrio was. We know The Faceless Men DGAF but it's a huge character shift nonetheless.