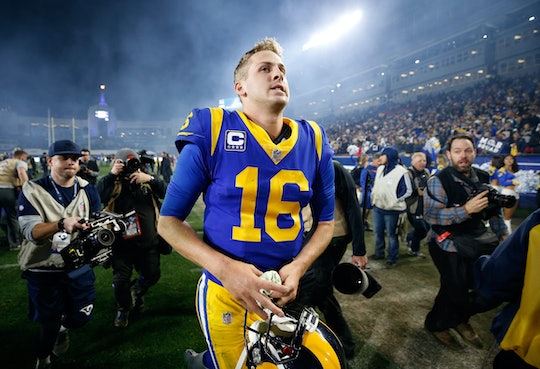 Is Jared Goff Married? The Rams Quarterback Reportedly Has A New Girlfriend

If you're in the Los Angeles area and hoping that you can score yourself a quarterback boyfriend (ha, pun intended) hope might be shot if you had your eyes on the Ram's newest quarterback. Is Jared Goff married? According to multiple sources, the answer is that he's not, but that he's also dating someone new, albeit quietly.

Goff, a 24-year-old NFL draft pick, is making a name for himself in the football world, and a new life in Southern California. As for dating? Well, he's never publicly disclosed his relationship status, other than in the summer of 2018, during an interview with ESPN, when he opened up about what his future looks like in L.A.

"I love it here. I want to win championships, leave a legacy, and, ultimately, be a great teammate, quarterback, player, and friend," Goff said. "A long-term goal is being in the Hall of Fame, but winning a Super Bowl is No. 1, and I don't want to wait to win it. That's really the only thing I think about." The interviewer then asked him if he could ever see himself raising a family there one day. "I need a girlfriend first," he responded, implying that he was single at the time of the interview, which was August of last year.

According to new reports, a girlfriend is what he may have just found. (He did say in the very next question that it's "not tough to find" girls in L.A., which is imaginably true for Goff.) Sportsgossip.com reported that Goff is quietly dating model Christen Harper.

"Jared is hiding her from everyone except some friends," a source reportedly shared with the site. "She was at the game last weekend but sat with the Whitworth clan and not his family and friends from home."

SportsGossip.com also went so far as to even compare Goff and Harper to the likes of Tom Brady and Gisele Bündchen (whoa, but they are another star quarterback and supermodel, one whom Goff will be facing off against in the Super Bowl).

Neither Goff nor Harper have confirmed the relationship, meaning that it's impossible to say whether or not it's for real. Plus, Goff's mom told Bleacher Report that fans shouldn't expect him to react to his newfound fame the same way that other professional athletes might, so keeping things about his personal life quiet might be completely in character for the quarterback. Still, it's not all that hard to imagine such a perfect couple existing.

Other than football — and perhaps his new girlfriend — Goff's interests also include pop music, which is not only refreshing to hear, coming from a professional athlete, but also makes me confident that his dating game is solid. (Everyone can appreciate a good bop, and the more people that can readily and honestly admit that, the better.)

When asked by ESPN who the coolest celebrity he's met so far in L.A. is, he replied: "Probably Taylor Swift. I got hooked up backstage at her Rose Bowl concert. I was with my sister, mom and grandma. I'm a big fan." The network then asked if it was true what his sister said: that he's a big fan of pop music. "She's not wrong. Every once in a while, you gotta put on some Katy Perry or Taylor Swift," he replied. (Bless.)

It might be a while until the couple publicly announces their relationship, or it turns out that it was all speculation — either is probable at this point. Regardless, it's not impossible to rule out maybe seeing Harper in the stands of the Super Bowl in February, but it's hard to say. Either way, I'm hoping that the couple has found happiness whether together or apart, and I'll be cheering them on from the sidelines regardless. (The football puns, they never end.)