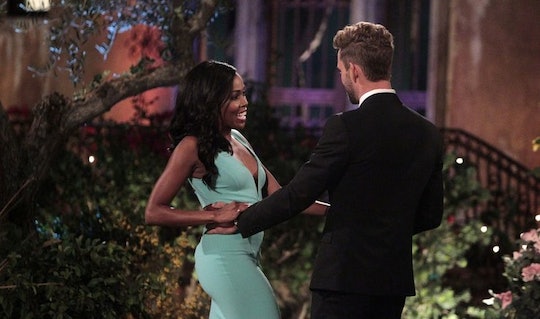 Jasmine May Be Heading To 'Bachelor In Paradise'

When Nick Viall sent Jasmine G. home on Season 21 of The Bachelor, she definitely went out with a bang. The contestants had just arrived in St. Thomas and Nick chose several women to go on a group date with, but for the entire beach volleyball game, things were tense. Jasmine G. was quick to bring this and her own concerns up to Nick, and it was her undoing. But now, is Jasmine G. dating anyone after The Bachelor?

When she confronted Nick about never getting any one-on-one dates and asking how he actually felt about her up until that point, it was clear that she had likely had one too many drinks on the beach that day and they were getting the best of her. As Jasmine G. became increasingly aggressive in the most awkward and puzzling way, it obviously turned Nick away and he ended up sending her home. But even if she left in a sudden and surprising way, is Jasmine G. from The Bachelor single now?

According to a recent Facebook live interview with Extra, both Jasmine G. and Alexis could be candidates for Bachelor in Paradise and if that’s the case, then Jasmine G. is definitely single and ready to find love and all-day cocktails in paradise.

In the interview, BIP was brought up a couple of times and Alexis quickly brushed it off, mumbling something about finding out at The Women Tell All special if they would be going or not. And when asked about their celebrity crushes, Ryan Gosling and Jesse Williams, Extra stated that: “If you’re watching guys, they’re single.” And later in the interview, Jasmine G. confirmed that she’s “still single” and that she’s definitely open to going on BIP if given the chance and is “open to meeting anyone.”

So it’s probably a good thing that Jasmine G. didn’t end up with Nick on The Bachelor and that she’s single now, because the thought of her having fun on BIP makes me want to power through Rachel’s season of The Bachelorette to get to it even though Season 13 is likely going to be amazing. Jasmine G. could very well be casually dating now that her time on The Bachelor has ended, but right now it looks like she’s unattached enough to be considering Season 4 of BIP as long as she’s asked to go on. So it wouldn’t be totally out of the question to pray to the Bachelor gods to get her that offer now.