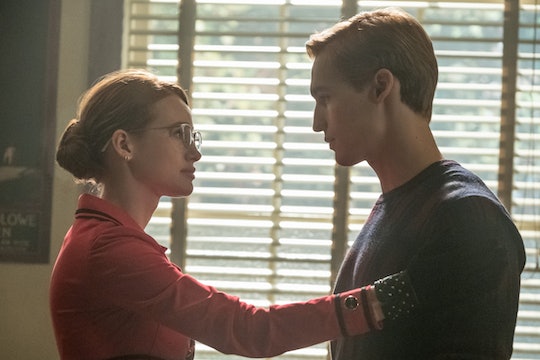 Riverdale may be taking its storyline back to where the drama first began. The series debuted with the disappearance of Cheryl’s twin brother, Jason, and by the end of Season 1, it was clear that his father, Clifford Blossom shot and killed him. But in the final episodes of Season 3, Cheryl and Ethel claim to have seen him, which has fans wondering if he ever really died. So is Jason Blossom alive on Riverdale?

On a show like Riverdale, it’s hard to tell what is real, so there’s no way to know for sure. However, there are a few circumstances that could explain why Cheryl and Ethel said they saw him. In “Chapter Fifty-Two: The Raid,” Cheryl told Betty that Edgar Evernever and The Farm cult brought Jason back to life. Then, in “Chapter Fifty-Six: The Dark Secret of Harvest House,” Ethel Muggs dropped the bombshell revelation that Jason was in fact, the Gargoyle King.

In an effort to prove that Jason was dead, Jughead — being the logical sleuth that he is — dug up his grave only to find it empty. And to get Cheryl to realize that what she was saying was impossible, Toni showed Cheryl the video of her brother getting shot, but that made Cheryl even more adamant in her belief that he's alive.

So how could Jason return from the dead? Well, the first obvious reason is that he didn't, and Ethel and Cheryl are under some kind of hypnosis or drug that is making them believe they saw him alive. It's completely plausible, because throughout this season, there have been instances of people getting high on fizzle rocks and seeing things that weren’t really there.

Now, another theory is that Jason never really died when Clifford shot him. Maybe he’s been hiding out all these years, plotting his revenge as the Gargoyle King, and playing the deadly game of Gryphons and Gargoyles with his former Riverdale High classmates. However, if Jason is alive, and is indeed the Gargoyle King, it still doesn’t explain who the Gargoyle King was back in the ‘90s when Principal Featherhead was murdered.

But there is one fan theory that could explain why Jason has reemerged. Reddit user Harley4L pointed out that in the Archie comic book series, Blossoms 666, Cheryl and Jason are not twins, but triplets, and they have a secret older brother named Julian whose existence was hidden by their parents.

“Now that Ethel claims “Jason“ is allegedly the GK on the show, what if that’s actually Julian, parading around as his dead brother,” wrote the user. “He could’ve dug up the grave and stole the body to make everyone believe he’s Jason back from the dead, in case he’s discovered. Julian could be the one Cheryl and Polly truly speak to at The Farm, maybe he was even the one who suggested the farm to Polly all the way back in Season 1.”

Now, the least plausible scenario is Cheryl's claim that Edgar Evernever brought Jason back to life, because it would basically make him a magical zombie. Riverdale has never been a supernatural show, and it would make no sense for it to start becoming one now.

But that being said, pretty much anything can happen on Riverdale, so fans will just have to wait and see how the “Jason is alive” storyline unfolds.