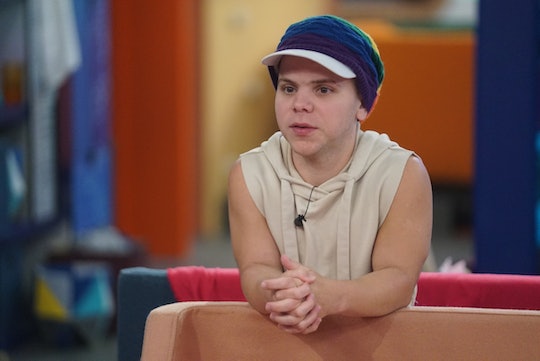 JC Continues To Fly Under The Radar On 'Big Brother'

Alliances come and go on Big Brother, but this season Level 6 has somehow remained strong and a secret. However, since Level 6 was formed at the very start of the season it is not surprising that some have forgotten who’s actually in the alliance. For instance, some fans may be wondering is JC a part of the Level 6 alliance on Big Brother?

Although JC almost always votes with Level 6 he isn’t actually a part of their alliance, and does not even seem to be aware it exists. When Level 6 was originally formed it consisted of Tyler, Kaycee, Angela, Brett, Winston, and Rachel. Winston and Rachel have been evicted, making Level 6 actually Level 4 at this point. Still, even after losing two members, Level 6 has remained in power in the house for a number of reasons, the first of which being no one else in the house seems to be aware this alliance exists.

Haleigh only nominated Angela and Kaycee this week because she believes them to be floaters and not because they’re a part of an alliance with Tyler and Brett. Additionally, although Haleigh put up Tyler when she was the Hacker she only did so because she believes he’s playing both sides of the house, which is only kind of true. In actuality he completely loyal to Level 6 and has only been pretending to be on FOUTTE/The Hive’s side.

Along those same lines, Brett has somehow convinced Haleigh that he’s on her side and not working with Tyler, Kaycee, and Angela. It is almost as if The Hive does not want to believe there is another alliance in the house even though all the signs are there. Additionally, unlike The Hive, Level 6 knows how to play to their advantages. Tyler has had “The Cloud” power app since the second week, but has only told Sam about it pretty recently. This is the total opposite of Bayleigh who trusted Rachel enough to tell her about her power app and Haleigh who revealed to the house that she was the Hacker, even though it did nothing to save Bayleigh from eviction.

Similarly, other than when Angela turned on Rachel, Level 6 has a solid trust in each other. Differently, whenever a vote was flipped and The Hive was blindsided they quickly turned on each other, blaming everyone except for the actual people working against them. For whatever reason, The Hive is more willing to believe one of their own turned on them or a power app was used then to believe Tyler, JC, or Scottie did not vote the way they said they did.

What also makes Level 6 powerful is they have the votes of the floaters. JC almost always votes with Level 6. The only time he did not was when he voted for Rockstar to be evicted instead of Kaitlyn, simply to cause drama in the house. Similarly, Sam was voting how Tyler told her to vote up until last week when she gave Bayleigh a sympathy vote. Scottie’s vote is hard to pin down but usually he votes with the house, which tends to be how Level 6 wants to vote.

In this way, Level 6 almost always has the votes, and The Hive continues to be surprised when the vote does not go their way week after week and it looks like this week will be no different. Even though Haleigh is the head-of-household, Kaycee won the Hacker Comp. As such, Kaycee pulled herself off the block and put up Rockstar in her place. With the power to also pick someone to play in the veto comp and cancel a vote this week, there is a good chance one of Haleigh’s allies will go home instead of a Level 6 member. This will also take away yet another vote from The Hive in the house meaning even if Faysal wins the next HOH he will have little control over who actually goes home because Level 6 will still control the votes.