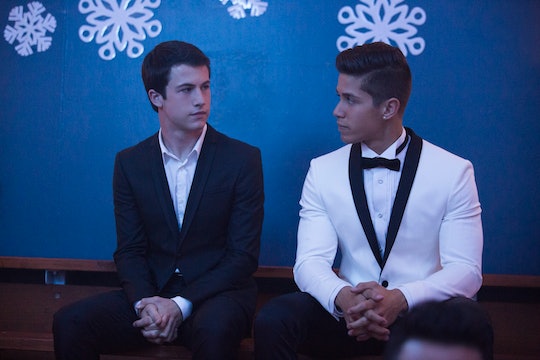 Jeff Played Such An Important Role On '13 Reasons Why'

As is the case with most adaptations, the 13 Reasons Why Netflix series is a bit different than the novel written by Jay Asher, mainly because the show adds a lot that wasn't in the book. The additions didn't take away from the main plot, however, and instead added to it, introducing new characters and expanding on ones readers already knew from the novel. But is Jeff in the 13 Reasons Why book? He kind of is, though it all plays out a little differently than on-screen. Warning: spoilers for the series and book ahead!

On the show, Jeff Atkins was the baseball player that Clay tutored. The two were kind of friends and Jeff gave Clay advice on how to talk to Hannah. Unfortunately, Jeff died after he got into a car accident. Though most people believe the accident was caused because Jeff was driving drunk, the truth is that, prior to the accident, Sheri and Hannah had hit a stop sign, knocking it down at the same intersection where Jeff collided with another car. Sheri had refused to call the cops and report that the stop sign was down, and by the time Hannah arrived at the gas station to call the police, it was too late.

In the novel, the story plays out in pretty much the same way. Both accidents did happen and Hannah did try to call the police. The difference is that Jeff didn't actually appear as a character in the novel. The kid that was fatally killed in the book did go to Clay and Hannah's school, but he was never named. There's also no mention of drunk driving as another possible reason for the accident.

Additionally, Clay didn't have a connection to the kid in the novel, but he was still the one who witnessed the accident. However, Clay wasn't nearly as upset about the death like he was in the show, considering he didn't really know this person all that way. The show version of Clay had a much different reaction and was extremely impacted by the loss.

It's also worth mentioning that in the book, Sheri (whose original name was Jenny), gets mentioned after Clay on the tapes, so she doesn't even know these tapes exist yet at that point in the story. Therefore, if Jenny actually did try to amend her mistakes after she heard the tapes, readers never know.

Though the show obviously took creative liberties when adapting the novel, the additions gave a lot more perspective into the characters than the book, making it an interesting experience for those who read and hadn't read the novel.